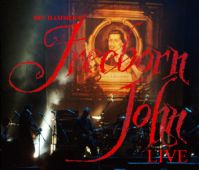 Rev Hammer’s concept for his Freeborn John DVD/CD has been around for a long time.

The original studio CD was finished in 1996 and this DVD package’s literature thanks “Mark Chadwick for an idea in a country garden, July 1994”. However, there are recordings in existence of Rev performing some of the songs on here (“ England’s New Chains” and “ Elizabeth’s Great Gallop”) as early as 1992.

This gives some indication of the amount of love, endeavour and effort that has gone into this project, covering the best part of 15 years. And it shows.

Freeborn John tells the story of John Lilburne, the leader of The Levellers (no not them) in 17th century England , and “the first English Radical”.

This DVD is a recording of the performance that Rev and his fellow musicians performed at the Beautiful Days festival, Escot House, Devon in August 2005. You also get a CD of the live recording as well.

The DVD (and CD) consists of 13 or so tracks, the majority written by Rev with one written by Justin Sullivan of New Model Army which is, I believe, exclusive to this release.

The story starts where it should, at the beginning, and takes you through Lilburne’s life, telling of his run-ins with Prince Rupert, The King and eventually Oliver Cromwell.

The story is told in a sort of Folk-Rock-Opera style with passion and intrigue as each of the performers taking the stage puts in enthusiasm and effort. And what performers there are, including but not restricted to; Rev himself taking the part of John Lilburne, Maddy Prior playing Elizabeth – John’s wife, Justin Sullivan (of New Model Army), Rory McLeod who somehow manages to pull off a great performance as the folk singer (something he has been doing for much of his life) and The English Civil War Society who put in brave performances during the fighting scenes.

I’ve listened to the original CD numerous times and the live CD accompanying this DVD a number of times, but nothing prepares you for the full impact of the DVD presentation. However, you have to pay attention – let yourself get distracted and the impact is lost.

But if you sit there and immerse yourself in the experience of the story, the storytelling and the songs, then you will be moved. Some of the literature in the DVD booklet is included on the DVD to help with the narrative and this works well, filling in the story between the main areas covered by the songs.

This is a DVD that is a required purchase for anyone who was at the Beautiful Days festival in 2005, an historic recording of an historic performance, which could quite easily move the viewer to tears at times (especially during “Seventeen Years of Sorrow” and “Lilburne’s Death Song”) and a document for anyone wishing to learn more about the history of England without the need to resort to a history book.

But for Rev Hammer, nothing like this would ever have seen the light of day as I can think of no other performer around today who could have pulled it off.

Rumour has it that Rev is planning to tour the show next spring (2008). If this rumour turns out to be true, then I wish him luck and can promise here and now that I will be there.

Not a live review in any shape or form, but I still felt the need to post something about this album so here it is.

I first heard the TD’s at the ‘Rock In The Castle’ festival in Scarborough and was very impressed by them. They were way down the line-up but immediately got my foot tapping and head nodding as I became absorbed by their set. This album is no different.

This is how I remember rock ‘n roll sounded years ago and hearing it once again is fantastic. It isn’t particularly new, original or ground-breaking but the simple fact is that it sounds GOOD. It’s fast, furious, full of guitars, choruses, solo’s, machismo and good-time vibes, without a ballad in sight. The album consists of 3 or 4 minute blasts of solid rock tunes and the track-list probably says a lot about their style;

Obvious influences are numerous and range from glam through to heavier metal with a borrowed punk riff or two. If you mixed early Guns n Roses with Rainbow, Motley Crue and Thin Lizzy you might get something sounding a little like this.

Don’t be put off by the fact they supported Status Quo on tour a while back, this is quality stuff. The Darkness do their polished rock-warbling very well, but this is how I think real rock ‘n roll should sound… 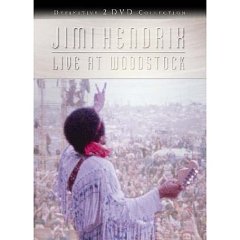 Everyone knows that Jimi Hendrix was good but seeing him at Woodstock really brings it home.

The fluidity and style with which he played – not to mention the soul – were out of this world. Delays on the day meant Jimi and his band of gypsies didn’t go on stage until 9am which might have been a pain for the festival-goers but it does make it easier to examine his playing all these years later. His dexterity and speed throughout some incredibly complex arrangements is plain to see and it is truly breath-taking.

This DVD is not perfect though. Critics point out that it is not a complete reproduction of the set as two songs with Larry Lee on vocals are excluded. Also, ‘Hear My Train A-Comin’ is only included in amateur black and white footage on disc-2 as the official cameramen were all busy changing their reels. The newly-formed 6-piece band are clearly flying by the seat of their flared pants on several occasions, although they do generally get away with it. The sound mix is also debatable because Larry Lee’s guitar and the two percussionists are barely, if ever, heard. Although looking at the state of Jerry Velez, bongo-player extraordinaire, it is probably a good job.

On the plus side there are plenty of highlights such as ‘Message To Love’, ‘Izabella’ and ‘Woodstock Improvisation’. Jimi’s natural showmanship is a joy to watch and listening to him talk either on stage or during interviews is a valuable insight into an easy-going, intelligent and kind man. It is also useful for all wannabe musicians to see how Jimi leads the other band members with various nods of his head, motions of his guitar, or the occasional scowl when something displeases him.

And of course there’s ‘Star Spangled Banner’. I first heard his version of this many years ago and thought it was good, but seeing him play it really adds a huge weight to the performance. At times watching this DVD I found myself contemplating whether Jimi Hendrix was actually human because surely nothing on this earth could do the things he could.

The extras are OK but don’t add a great deal to the package which isn’t a big problem because the main event is so good. However, it is nice to get a flavour of life at the time and perhaps what it was like to be around Jimi Hendrix.

This release would probably satisfy anyone who was going to buy only one Hendrix DVD as it contains most of the classics. In my opinion it also showcases Jimi’s unique guitar talents the best with significant footage of his playing, rather than singing, style. 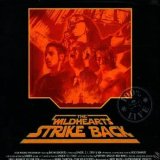