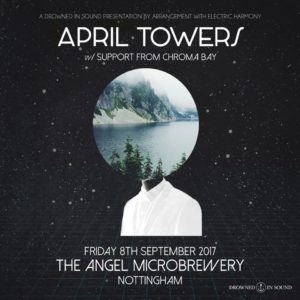 I only found out I was going to this on the 07 September, so I was a bit surprised to be waltzing through Nottingham on a Friday night heading for one of my old haunts, The Old Angel, now renamed The Angel Microbrewery, to see a band I’d only just heard of but that sounded great on an unspecified streaming service, with my mate who’d been closely following them for a while and had supported their pledge campaign for their new album ‘Certified Freaky’.

Support was from Chroma Bay, who came across as quite tuneful and timid, with occasional ear blowing bass and drums, and weren’t really my cup of tea, although they did keep mine and the crowds attention, despite struggling a little with the sound and monitor levels. Top marks to the Keyboardist, who won hairstyle of the night by a country mile. Brilliant.

The two piece, keyboards and vocals/guitar, that makes up April Towers, kicked off their album launch show at a little after 10pm, which was a nice change to 10pm being curfew time for most of the recent gigs I’ve been to, to a packed room of eager fans.

Coming across to my tinnitus strained ears as a, and this is no bad thing, enthusiastic, upbeat mix of Orchestral Manoeuvres in the Dark (OMD) and Chvrches, with a dollop of New Order, April Towers tore through “Silent Fever”, “Losing Youth” (definitely the most straight up, catchy of the tunes), adding “Like An Animal” and, I’m sure, “A Little Bit Of Fear” in there somewhere as well.

Despite obvious sound issues with the monitors (largely unnoticeable to the audience) the overall effect was magnificent and the audience lapped up the the whole thing with the enthusiasm that was obviously transmitted from the stage. The band, you could tell, were having a thoroughly enjoyable evening. Even some of the chatterers at the back STFU and danced towards the end of the show.

“Takes One to Know One”, the latest and possibly greatest of the bands offerings (go play it; Spotify) was in the mix somewhere (although “Losing Youth” is my favourite).

The end, as it must, came, and the band vacated the stage, thanking the audience, the venue and the efforts of the sound man.

My thanks go to the sound man. A bit of feedback is a beautiful thing and the noise that stopped one of the songs mid-flow was something special to my ears; although I don’t think the band were over the top about it.

Go get the world, April Towers! It’s desperately waiting for you. 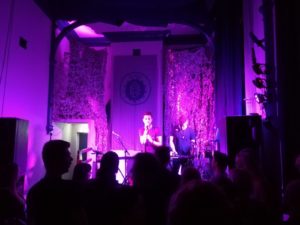 Thanks to @neilgreen74 for the photos and videos.