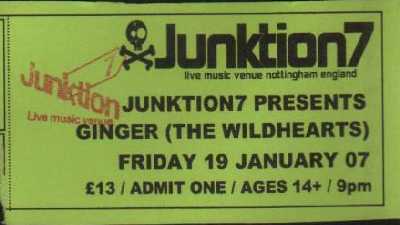 This was intended to be a review of The God Damn Whores, Robochrist and Ginger but due to other more pressing matters and being far too drunk to remember much of Ginger’s set, I shall push on with what remains.

Another rocking set from Jon Poole and Co warmed us up nicely for Ginger. It was good to see them this time having heard the CD and The God Damn Whores dutifully took us through most of that to the joy of the people rocking out stage front. “Unemployment Man” made the set for me, but the lack of Jon Poole putting his head through the ceiling spoilt the evening slightly.

The Last Incarnation of Robochrist*

Next up was Robochrist. Billed by the venue as;

“The twisted alter ego of The Sisters Of Mercy guitar player Chris Catalyst (AKA Chris May)” – after doing his own roadie and soundman work – took to the stage to a cacophony of noise and stood, back to the crowd, arms wide apart in a Messiah-like pose and proceeded to bludgeon the audience around the head with an audio-visual assault, which barely stopped, let alone slowed down, for upwards of twenty minutes. Filling the stage with an enormous stage presence throughout we were treated to an extraordinary show at 225+ beats per minute, with screaming metal-esk guitars and random samples of TV programmes (Monkey for one), with guest (sampled) appearances from Johnny Vegas and the small boy out of the “Charley says” cartoon. Marvellous stuff. It seems a shame to kill him off but, apparently, Robochrist must die*. Grab your CD while you can. I did and it’s not left the CD player yet.

What we’d all been waiting for finally appeared and I am sad to say that I enjoyed it all far too much and therefore I am struggling to remember anything.

Ginger seemed to enjoy himself and was on good form, Jon Poole was his usual energetic and enthusiastic self – chucking in a few “Beefy, Beefy” comments now and then, much to the bemusement of the crowd – and Jase Edwards showed his guitar talents off once again.

We raced through a fairly standard set for this type of Ginger show, with a couple of new ones chucked in here and there for good measure and the crowd seemed to lap it up.

Note for self: Cut down on the alcohol intake…