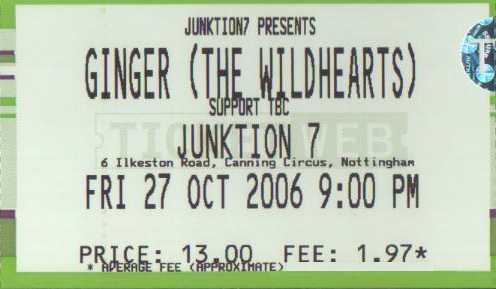 The first support-slot was filled by New Generation Superstars. Old-school in terms of appearance – long hair, bandana, sweat bands, white vest – and sound, this 4-piece were new-school in terms of energy and effort. Many of the intro riffs sounded distinctly familiar and quickly got the foot tapping, however the rest of the song sometimes tailed off leaving a bit to be desired. This is probably very harsh on them but for some reason they reminded me of The Hunters Club from the early 90’s.

And did I mention that they were loud? Well, they most definitely were and this was a theme that continued throughout the night. All in all, a favourable thumbs-up for the NGS’s.

Further support was provided by Random Jon Poole’s very own God Damn Whores, including a very edgy-looking Ginger on bass. It felt strange to see the main act providing their own support and to start with it diminished my anticipation of the main event. However, this was short lived as it soon became clear that the GDW’s had a few decent songs to play. For me the stand-out one was their finale, “She Took Me Out”, which was more melodic than some of their other rockier, punkier tunes. Jon also putting his bald head – and part-painted face – through one of the ceiling panels in a fit of excitement during the set was also very amusing.

And were they loud? Oh yes. After a short rest Ginger and co came back on stage to begin proceedings with a rare b-side, “Eager to Leave ‘er”. One of the first things I noticed was that they seemed less harsh than the previous two sets and much gentler on the ears. Don’t get me wrong, they were still loud but without the sometimes ear-splitting noise heard earlier.

Or maybe I was just drunk by then and oblivious to the pain.

They carried on at a brisk pace with the same-as-always mix of something old, something new (ish), something borrowed and something completely unexpected. Highlights were three classic Silverginger-5 songs (Brain Sugar, I Wanna Be New, and Sonic Shake) and Elvis Costello’s “Pump It Up”. Banter with the crowd was slightly more low-key than I’ve heard before but nonetheless friendly and amusing. It’s sometimes taken for granted that the standard of musicianship at a Ginger show will be first-class – as it was again tonight – but I have to mention it here. Ginger was brilliant vocally and on the guitar, Random Jon’s bass was great, Jase Edwards on guitar is such a natural player, and Denzel on drums sounds like he’s been playing with Ginger/Wildhearts for years.

My lady-friend made a very interesting point to me after the show. I hate to say it but she’s not a particularly huge fan of Ginger so she doesn’t really look forward to his shows that much. Once there though, she always has a fantastic time and gets into it which can only be the sign of some great songs and an equally great band.

Other trademark songs were rattled off (So Into You, Top of the World, Cheers , Yeah Yeah Yeah) before finishing with “29 x the Pain” which in my eyes is the perfect way to finish a show and send the crowd home hoarse after singing along.

At the risk of repeating myself, I can’t praise Ginger highly enough and I would thoroughly recommend anyone to see him live. He is a legend of his time and it’s obvious to me that although he might not have received the fame and fortune he deserves yet, it will happen in the future in much the same way as many golden greats eventually become worshipped by the masses. Given the chance to experience things here and now, rather than retrospectively, you’d be silly to miss it.