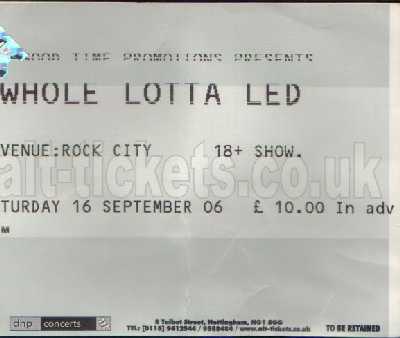 Tribute bands can vary wildly in terms of quality and entertainment-value so it’s normally something of a lottery when you go to see one. In the absence of the fantastic Dread Zeppelin touring I thought I’d give Whole Lotta Led a go instead to see what they could make of some of rock’s classic songs.

Arriving downstairs in Rock City mid-way through a number, the first thing I looked for was – stupidly perhaps, I admit – any physical resemblances between the musicians on stage and Led Zeppelin. The similarities were non-existent but the guys on stage could have been doppelgangers for four other celebs; lead singer = Roger Daltrey, drummer = a young Keith Moon (maybe these two should have been in a tribute band called The Whom instead), guitarist = Peter Stringfellow (sorry, harsh I know), and bassist = Chris Langham (comedian currently in a spot of bother with the old bill, sorry, even harsher).

The first full number that I heard was, ‘In My Time Of Dying’, a meandering 11 minute stroll through slide guitar land. Singing and musicianship was all of a very high standard and made a very good job of imitating the original song. The audience was generally in the mature age bracket, shall we say, and seemed to be enjoying the show with some dancing occurring around Zimmer frames.

Next up was the bluesy 7+ minute long, ‘Since I’ve Been Loving You’, and soon afterwards the instrumental, ‘Moby Dick’, complete with obligatory 10-minute drum solo. These are all good songs but when the singer mentioned later that they were having to cut the set short due to Rock City’s timetable it made you wonder whether playing a few shorter, snappier numbers might have been more appropriate.

Having said that they did also play, ‘Rock ‘n Roll’ and ‘Custard Pie’, a couple of great songs for a live set. Inevitably ‘Stairway To Heaven’ was played towards the end with the guitarist using a nice double-necked Gibson before proceedings were topped off with ‘Whole Lotta Love’. It’s the first time that I’ve seen a Theremin being played on stage and to be honest I could barely stop myself laughing. I know Jimmy Page used one but that was 30 years ago and it just doesn’t look very rock n’ roll downstairs at Rock City in 2006. You have to admire the effort and attention to detail though.

Overall, Whole Lotta Led do a very good job of paying tribute to Led Zeppelin and particular mention must go to the drummer who was really ‘giving it some’ all night, despite not looking a day over 16.

Recommended for all fans of Led Zep or even if you’re open-minded and just want a good night out listening to four quality musicians playing some quality old songs.

Stumbling into Bar 7 at sometime shortly after nine O’clock, I was stunned to find out that the doors to the upstairs venue had only just opened and the first band had only just gone on. I should have paid more attention to the website for the start times I think. At least I’ll get to see New York Alcoholic Anxiety Attack (NYAAA).

Or not. Well I actually managed to catch the last two songs because I ran into an old mate, who I hadn’t seen for years, who wasn’t going to the gig, and sat chatting to him until about 11.00.

NYAAA, from what I heard, sounded quite good. fast-paced, furious and very loud, NYAAA should get any venue rocking. Unfortunately, the Nottingham public hadn’t noticed that there was a gig on and the very sparse turnout, myself included, lurked in the shadows at the back, clapping sporadically at the end of each number. It was a shame.

The Bleeding Hearts came on stage at about 11:30, I should think and asked everyone to move forward. The crowd had filled out a little by this stage, but the venue was by no means what you could call packed. The last time the Bleeding Hearts played in Nottingham, J7 was heaving so I am at a loss to explain the sparse turnout this time. Unless it was purely because the students are yet to return to University.

As ever Bleeding Hearts put on a great show. I think they started with a couple of new numbers, because they said after a couple of songs that they’d now got the new ones out of the way and normal service was now resumed.

We were treated to “Promised Land”, “Fear Of The Dark”, and “Patriotic Crap”. All the time the crowd seemed to be enjoying themselves and cheering appreciatively at the end of each number. Even the barmaid was dancing at one point.

The band were their usual energetic selves and I was a little upset for them that the gig didn’t seem to have been promoted better. However, this meant plenty of space for those that had made the effort to dance in, and there was quite a bit of movement from the crowd. At one point we were told that it was compulsory to dance. The whole crowd, without exception, obeyed.

The fiddle playing, as ever, was excellent. Why this band don’t get more attention I really do not know.

I’d taken the decision to purely enjoy myself at this gig, rather than spend the entire next song trying to work out what the last one they played was and taking photos that don’t come out, like I do at most gigs, so please forgive the lack of memory of what the they played.

Others that I do remember, were a great version of “Million Miles Away”, “The Queen Of Happiness”, “Some Kind Of Love Song” and the crowd favourite “Glad 2 B Alive”, which went down a storm.

And then it was all over and time to go home. No encore, but I really wasn’t expecting one due to the low attendance. Let’s hope for a better showing for The Maze gig on 25 November 2006. I’ll be there.