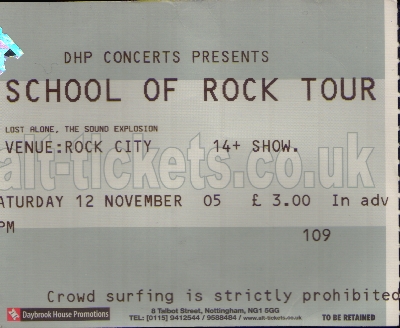 After planning our meeting point at the Tap and Tumbler for 20:00, our plans were thrown into initial disarray by finding out that the first band were to appear at that time. This meant bringing the meet forward by half an hour to give us time for a pre-gig warm up drink.

Finding the bus stop empty was the second problem as the timetables had changed (again) and we were left standing at the stop for 20 minutes. You don’t want to hear me rant on about public transport for hours so, suffice to say that when the bus eventually came, it was closely followed by another one who’s driver obviously wanted to go home early and we had to wait while all his passengers were forcibly evicted from that bus on to ours and we were packed in like cattle for our twenty minute journey of hell into town.

The Tap proved a great choice of meeting place with the loud pumping rock music easily getting us in the mood for the gig to come. After playing spot the tune you recognise for twenty minutes (and coming out with a total of two – showing my age here) we ventured up to Rock City for the first band.

Our timing was brilliant. We’d just got the first cans of Red Stripe in when the first band appeared.

LostAlone are a three piece made up of Mark Gibson (drums and vocals), Steven Battelle (vocals and guitar) and Tom Kitchen (bass and vocals) who provided and opening act full of energy and power. With their matching black hair the band reminded me of a negative version of the wonderful Birdland who had a brief career as speed-indie-rock kids in the late eighties/early nineties. The band’s energy certainly matched Birdlands, although the music was far from indie with some delicious riffs and one particular number which featured a particularly good chugga-chugga running through it.

They looked like they were having a thoroughly wonderful time and I was particularly impressed with the drummer (and drummers never impress me).

With barely a pause between numbers, except for a brief “Thank you” at the end we were whipped through a brief set that contained “Blood Is Sharp” (the soon to be released single), “Flower”, “Execute”, “Gospel”, “Make Me Rhyme”, “Long Awaited Melody” and the last number “Music And Warm Bodies”.

The lead guitar and vocalist made the most of the stage swinging the guitar around and bouncing all over the stage and the bassist was far from motionless as well, banging his head along to the beat.

During the second to last number the vocalist got into a conversation with a very drunk chap in the audience. We weren’t let in on what it was all about, but the next song was dedicated to “My new found best friend in the crowd, who thinks he’s a comedian”. A nice put down.

They left the stage to applause from the crowd and I found myself quite disappointed that the set was so short, but I suppose that’s what happens when you’re the first band of the night.

I’m still not sure what the bald chap hiding at the rear corner of the stage was doing. We initially thought he was a shy keyboard player, but eventually decided that he was the guitar roadie and general plectrum and random guitar bit catcher as he certainly caught a few bits and pieces chucked at him by the guitarist during the course of the set.

It was now time for another can of Red Stripe. (limur)

Next up were The Sound Explosion, who are Kit Endean (guitar / vocals), Glen Roughead (guitar / vocals), Euyan Macfarlane (bass) and Stevey Gibson (drums). Four lads from the north east carrying on the tradition of hard hitting riotous bands that Newcastle is famed for.

Mark struggled with his guitar during one of these numbers and had to abandon it completely onto the stage at one point but Simon managed to cover for him, with the Levellers normal professionalism.

Having taken to the stage these four fresh faced teenagers began to pound out the opening track and straight away I knew I was going to enjoy this set.

With a mixture of high octane punk rock blended with some soulful lyrics and a little bit of bluesy guitar thrown in for good measure, The Sound Explosion proceeded to bash out a blistering set that made an old duffer like me sweat just watching them. On stage antics as well as forays into the crowd added to the entertainment and the gentle manner of the on stage banter made me warm to the boys even more.

Not being as well organised as the other reviewers I can’t give a detailed set list but I believe all bar one track “Apollo” (the next single) were taken from the self titled debut album “The Sound Explosion”. Two that stick in my mind were “Street Freak”, also a single and “In The City”.

All said and done The Sound Explosion proved to be one of the most exciting new bands I’ve seen for a while and at three quid for the entrance these boys were worth the ticket price on their own.

A quick trip to the merch stand for a copy of the album (which I gave a good listening to whilst out with the dog the next day, poor lad I don’t think he’s ever been walked at such speed, the album really cracks on a pace) proved that my first impressions were not wrong. Head over to thesoundexplosion.com for more on the band as well as some media downloads, I don’t think you’ll be disappointed! (Cheers, Simon).

Two (or so) Red Stripes later…(Simon)

After seeing the Tokyo Dragons at the Scarborough Castle festival and then hearing their album it didn’t come as a great shock to find them headlining this three-band tour. The reason for this was obvious after the first few minutes of their set; they may well be an up-and-coming band but they sound like they’ve been around much longer, especially when heard alongside the apparently younger bands on show here.

The crowd on the whole were clearly there to see the Dragons and as soon as the band came on stage to begin the extended instrumental intro the place was jumping. From what I remember they opened with ‘What The Hell’ before launching into most of their album (‘Give Me The Fear’) with very little fuss or chat with the audience, apart from the occasional “How ya doin’?” kind of thing drawled in an American accent which I hope was accidental rather than deliberate.

As I’ve said before in other reviews this band is a real blast from the past. They sound like lots of old greats (AC/DC, Rainbow, Thin Lizzy, early G ‘n R) all mixed together and as a bonus they have some great tunes too. The musicianship is flawless with riffs and solos all over the place, the only possible weak link being the vocals here and there although I should add that this is on the record and not live. Even so, it’s not a big problem.

Other songs played were as follows, and in no particular order; Do Ya Wanna?, Get ‘em Off, Come On Baby, Let It Go, Johnny Don’t Wanna Ride, Teenage Screamers (superb), Ready Or Not, and Chasing The Night. To close with they played a tune that I didn’t recognise unfortunately. I’m also not sure whether they played ‘Burn On’ which is a shame because that’s another of my favourites – a simple tune but it works so well.

The Tokyo Dragons are a band in the classic rock ‘n roll mould with hair – and beards – everywhere, guitars going off left, right and centre, and producing a genuinely enjoyable experience even for a miserable old git like me. Highly recommended.

(For what it’s worth I’d also recommend the other two bands, ‘ LostAlone’ and ‘The Sound Explosion’, as reviewed above. It was great to hear three bands in one night and to like them all.) (@Jimbob247247)