This was a charity gig in aid of Cancer Research UK and the £5/6 entrance fee was a bargain.

Fist of all, in complete contrast to every single other gig I have ever been to, I arrived too early.

Luckily Junction 7 is a nice pub as well and the bar downstairs kept me entertained until it was announced at about 9 o’clock (two hours later) that the first support band would be taking the stage shortly.

The first were, according to my flyer, called Pornovurt and only seemed to remain on stage for a few minutes.

The second, again according to my flyer (although I can vouch for that as well as I recognised them from the pictures on their Website), were Dangerlust and these again only seemed to remain on stage for a couple of songs and a few minutes. However, time is relative (especially when you’re slightly the worse for wear) and I suspect that Dangerlust’s set was the longer and the better of the two. I enjoyed it more and it seemed to bolt past faster, although I can honestly say that I remember very little of either band.

(Apparently, having looked at Dangerlust’s Website, the lead singer, “Rachel Santini, is so small she has to play a miniature guitar”. Well there you go. You can also download a free MP3 file of “King of the World” – which I expect they played (in fact, now my memory has been tweaked, I am sure they did) – and see where they are playing in the not too distant future, including this venue on 01 June 2005)! More people danced to the Dangerlust set (but not me, I was sort of leaning upright by this time)!

A Lady who had tried to sell me some raffle tickets earlier (sorry I didn’t buy any, I didn’t realise what they were) appeared on the stage and, after a bit of a build up, announced Bleeding Hearts, and the crowd cheered in expectation.

The band lined up from left to right, Nick, Steve, Gel and Baz (at the back, bashing the drums).

Tonight they were loud. Very loud. They weren’t as loud as when ariel-x played in Derby, but they were not far off! They were also different – and better. Maybe it was the smaller venue, but the band kicked off fantastically well and produced the same high quality punk driven folk with an edge for the rest of the evening. Steve singing his heart out with passion and aggression until the most steadfast of “stand still and don’t move” merchants was, at the very least, tapping their feet (or swaying unsteadily)!

As I don’t really know any Hearts stuff, I’m a bit stuck when it comes to naming the songs (even if I could remember what they played), but what I can say is that the band were driven, and the entertainment was ongoing, constant ,invigorating and above all, enjoyable.

And the crowd loved it, with people dancing about from left to right, as if their lives depended on it. Marvelous stuff!

Just one thing. Turn the fiddle (and Vox) UP!

Oh and it all ended a bit suddenly and somebody mentioned that Steve looked a bit disappointed with the crowds reaction. He shouldn’t have been. I thought the crowd and band were great.

Roll on the next time and I’ll definitely be buying a CD or two. 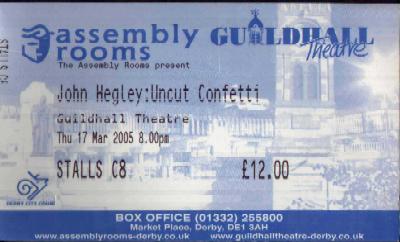