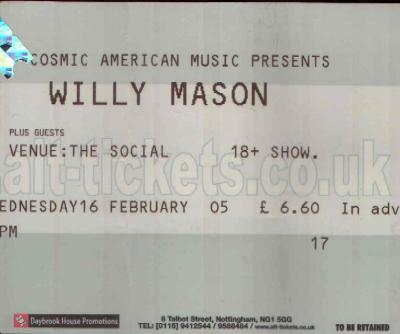 I was fortunate enough to catch Willy Mason when he opened for the 22-20’s at the Rescue Rooms in October last year, and left that gig feeling I’d witnessed something special. Listening to the Album “Where the Humans Eat” confirmed my first impression that Willy was truly gifted. Since then Willy has received acclaim from the music industry being championed by the likes of Jo Wiley and the NME, with the single “Oxygen” finding a place on the Radio 1 playlist. Luckily we were quick off the mark when a UK headline tour was announced and tickets for the Nottingham gig were duly purchased.

The Social is a small venue in Nottingham city center, frequented by students from the two universities and this would be my first gig although I’ve been in for a beer before now. On offer were Dave Wyatt, Plan B and of course Willy Mason, a completely acoustic line up.

First up was Dave Wyatt who’s style reminded me of singers in the early folk clubs, singing songs about life interspersed with witty stories. He did a good job and got the crowd nicely warmed up.

Next up was Plan B, an acoustic Hip-Hop artist from London. Armed solely with a mike and acoustic guitar, something not generally associated with this genre he punched out some very hard hitting tracks, Telling of the trials and tribulations of inner city youth these cuts are not for the feint hearted, being liberally splashed with street language and expletives its not the sort of stuff to play to your mum. The tracks were however very well crafted, the lyric flowed very well and although I’m not qualified to make real judgment, not being a big hip hop fan, I personally thought he was excellent, the lyrics certainly made me think about a few things.

Now to the main event. If you’ve not heard Willy Mason yet you’re in for a treat when you do. Willy, a 19 year old troubadour from Massachusetts, has been receiving a lot of attention since the release of his debut album “where the Humans Eat”. A collection of songs taken from life and personal experience, coupled with a traditional country / blues style guitar Willy is bringing folk music to the twenty-first century. I say folk music not in the yo-diidly-o finger in the ear type folk music, but the social comment, protest aka Woody Guthrie, Bob Dylan and Billy Bragg sort of thing. The set opened with “Gotta Keep Movin'” which also opens the album, quite a traditional blues feel to this one and a good strong start. The set then progressed through most of the album “Hard Hand to Hold”, “Where the Humans Eat” and of course the single “Oxygen” mixed with some material not on the album and one written by Willy’s parents (both of whom are also performers). Willy encored with “our town”, written from personal experience of the NYPD, “Sophie” and as I’m writing this I can’t remember but I think it was “Still A Fly” plus another.

I left the venue feeling again very privileged to have seen someone with a real gift, performing songs that I could relate to on a personal level as well as appreciate the craftsmanship involved in the construction. I would just like to leave you with one thought “We can be richer than industry. As long as we know that there’s things that we don’t really need”. Can’t wait for Willy to come round again, until next time. 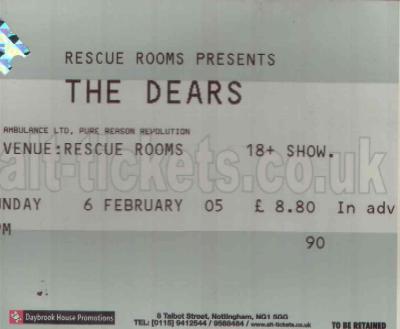 The Rescue Rooms have been a god send for Nottingham, a venue that is a step up from the back room of a pub, but small enough to attract the new up and coming bands who would not fill Rock City proper, something that has been missing in Nottingham for many years. This is saving me a fortune through not having to travel to the Charlotte in Leicester, the nearest venue of similar proportions.

On offer tonight were three bands, all for the princely sum of 8 quid and whilst I was not aware of the opening act Pure Reason Revolution, both Ambulance Ltd and The Dears have a reasonable following from the music press (BBC 6 Music is fast becoming my favourite station for finding these gems amongst all the crap of the mainstream pop industry).

Unfortunately I arrived a little late for Pure Reason Revolution and only caught the last track of their set, but what I heard sounded promising. A five piece formed by two mates from Uni they’re beginning is typical of hard edged guitar bands, citing Floyd, Led Zeppelin, Super Fury Animals and The Beach Boys as influences.

Next up were Ambulance Ltd, a four piece from New York City, who have been creating a bit of a stir. Taking influences from 60’s pshycodelia, 70’s rock and 80’s Brit pop. The boys really showed that all the time spent in the garage pays off, the set being well thought out and the performance very professional. Thumping bass along the lines of John Entwitle were the backbone of their music filled out with some subtle almost jazz influenced drumming, topped of with some fine guitar work, intricate in places mixed with thundering riffs that Keith Richards would have been proud of. A single, Stay Where You Are, is due out on Feb 28 to be followed by an album on March 14, two discs destined for my CD collection no mistake.

The Dears have been around since 1995, but the band has been through a few transitions since then the only surviving member of the original outfit being Murray Lightburn. Hailing from Montreal, Canada this six piece mixes together Johnny Marr style riffs with pshycodelic synths with a little bit of flute thrown in for good measure. This tour is in support of the Album No Cities Left and the Smiths influence can clearly be heard, maybe a little too obvious in some places. It was rather a shame that the sound man decided to go for volume rather the quality as a lot of the more subtle aspects so prominent on the album were completely lost in the fuzz of distorted vocals and overpowering bass. It was again obvious the amount of time spent rehearsing as the band punched out a very well crafted set.

Overall another good night of original music, all for less than a tenner, bargain at twice the price!