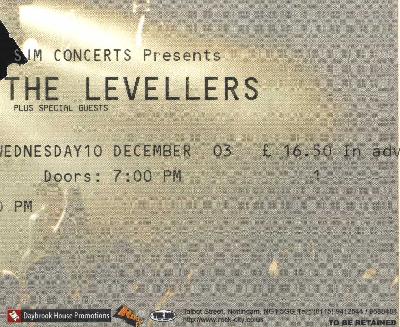 One of the worst sounds in the world is standing on Talbot Street outside Rock City and hearing the first thuds of the bass drum of “Beanfield”, while your still 100 yards from the entrance. Run!

Oh well…late again. Still, only missed the first minute and that was while forcing my way to the dance floor. The Levellers looked superb. Mark had a massive smile on his face all through the gig and Matt was sporting a beard (and was hidden from most of the crowd to the right of the stage).

I’d got into the swing of things by the end of “Battle of the Beanfield” and was looking forward to the rest of the gig. “Beanfield” was followed by a rousing version of “Sell out”, which was quickly followed by “Bellaruse”, which I hadn’t heard live for absolutely ages!

“Hope street”, “Four Winds” and “Together All The Way” followed. And then “Lowlands of Holland” which was absolutely superb and even better for being unexpected.

The whole band looked really relaxed and enjoying themselves tonight, Jon and Jeremy swapping places over and over again and Jeremy taking every opportunity to shake those dreads!

An excellent “Too Real” and “Edge Of The World” were next and then the band left the stage with the exception of Simon. It’s always great when Simon does his solo bit and tonight was made greater because someone in the crowd had decided to chuck a can at him during the previous number. Simon verbally ripped him to shreds, asking him whether he thought it was big to chuck stuff at bands on stage, and then dedicating (the song that’s becoming known as Simon’s song) “When Love Runs Out Of Time” to him. Simon sung it with great passion tonight and it came across brilliantly. I think the offending crowd member left the building some time before the end!

After the rest of the band reappeared, “Beautiful Day” was next and then “Aspects Of Spirit”, an excellent “61 Minutes Of Pleading” and a rousing “15 Years”.

Mark was having trouble with the tuning of his guitar at the beginning of the next number and asked the crowd whether he should smash it up. The crowd roared expectantly, but Mark just said “Oh, it’ll be alright” (sounded fine to me) and launched into “Dirty Davey”. At the quiet part in “Dirty Davey” (and come to think of it, in “Beautiful Day” as well) there seemed to be a longer than normal pause in the song and Mark and the band seemed to be stood watching the audience, before continuing the song. Why the pause and the smiling faces? And how many of the crowd did they spot who didn’t know the songs?

An extended “England My Home” was next and you could tell by the extra bouncing that Jeremy did on Charlie’s drum riser that it’s his favourite! An excellent “Liberty” followed and the band left the stage.

We wanted more. We got it.

“Men-An-Tol” was the first number of the encore, Simon again giving the vocal his all. “One way” was next and was greeted by the crowd like an old friend and then the encore was finished off with a superb “Wake The World”, which gets better live on each hearing. And Simon’s learnt the guitar line now as well. Brilliant.

By far the best, though, was left for last. Admittedly it was the best because, after leaving the stage for the second time most punters thought that was it and left the venue. More fool them as, to ecstatic cheers, the Levellers reappeared for a superb rendition of “Riverflow”. And there was room to dance. And dance we did!

What a shame it had to end.

Got myself a nice new “Metway” top on the way out as well. A superb evening!

New year’s resolution – get to Buxton on time!

I’d never been to the ice arena to see a gig before. The type of so called artists that this venue usually attracts leaves me cold, and I’m not usually very keen on indoor stadium gigs, finding them a little uninspiring with over inflated beer prices and shitty security guards.

However when the mighty maiden announced a date, this venue was much more preferable to the NEC Birmingham (I absolutely despise that venue and will only go if no other suitable alternative is available). And I have to say I really enjoyed this gig. We arrived at the venue and proceeded to the entrance preparing to be mauled by some gorilla who struggles to string two grunts together but no, the security people were polite, considerate and not at all intrusive. So far so good. Inside the venue all the staff were very helpful but the beer was still expensive, although not as bad as the cursed NEC.

We entered the arena proper and I was delighted to find that the venue isn’t just a cavernous hall but quite a nice arena with a decent sized stage and a good view from the floor.

Anyway on with the review of the bands.

Funeral For A Friend

Perhaps a strange choice of support. I believe that Bruce had them on his Rock show on BBC 6 music and thought they deserved a break and so offered them the slot. They were OK, not really my thing but they seemed competent enough. I don’t know anything about them or any of the track titles so I can’t go into much detail other than I don’t think I’ll be buying the album.

Now to the main event, Maiden are quite rightly metal gods and they were to prove just why they are. The set was a mix of the early classics such as “The Trooper”, “Wrathchild” and “Hallowed be thy Name”, mixed with more recent cuts “Afraid of the Dark”, “Brave New World”, etc.

As you would expect with Maiden the stage show was great with projections of some of the artwork so beloved by maiden fans and of course an appearance by Eddie.

Bruce had a rant about Kerrang, something he seems to do regularly and I think it’s a bit unnecessary. Iron Maiden are not short of a few fans and don’t need to get into petty squabbles with the music press, so I’d rather have more songs and less rant.

The encore consisted of “Number of the Beast” and “Run to the Hills”, guaranteed crowd pleasers and that’s exactly what they did.