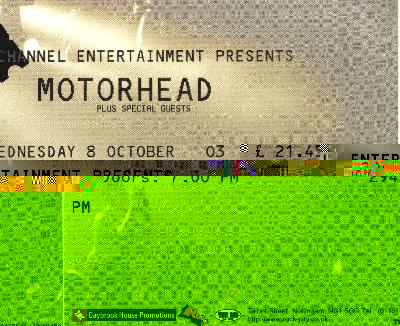 I’d always promised myself that one day I would treat myself and go and see Motorhead and, after missing them at the outside gig in Sherwood Forest in the summer, now was the time.

But first the real reason for going. And that was the support band. This Motorhead gig suddenly became un-missable when the Wildhearts were confirmed as support.

I arrived at the venue at 8 O’clock, bought two cans of red stripe to avoid getting too annoyed by the what is now becoming legendary bar service, headed vaguely in the direction of stage front, and almost straight away Ginger and Co appeared. It wasn’t a typical Wildhearts set, but still made great listening. They started with “Nexus Icon”, off the new album “The Wildhearts Must Be Destroyed”, and proceeded to blow us away with a selection of the heavier side of their catalogue, including “Suckerpunch”, “Woah Shit, You Got Through”, “Vanilla Radio”, “Stormy In The North, Karma in the South” and a fantastically fast “Get Your Grove On” amongst others.

The highlight for me though, “Suckerpunch” aside, was the new single “Top Of The World”, which although sounding slightly out of place slotted in with the heavier stuff, still came across as class.

The band, despite being dwarfed by Motorhead’s drum riser and looking slightly squashed for space on the restricted stage, still managed to look and sound like they were having the time of their lives. Ginger told us what a privilege it was to support Lemmy and Co, but other than that was unusually quiet on the conversational front and seemed content to bash out the numbers. John Poole smashed out the bass lines and posed enthusiastically for the crowd and CJ thundered out the riffs.

Unfortunately, it was all over far to quickly and they left the stage with a “See you next time” from Ginger after an excellent 50 minute set.

Now we waited for Motorhead, and at about 9:30 the lights dimmed and Lemmy appeared on stage, followed by the rest of the band. This is what the crowd had been waiting for and the sense of expectation was easily noticeable. I started off at the back, with a restricted view after visiting the bar, while the band ground out “Motorhead” but gradually, soon after Lemmy had asked whether there were any punks in the audience and launched into “God Save The Queen”, made my way onto the dance floor.

There were highlights aplenty. “Sacrifice” sticks in mind specifically but partly for the wrong reasons. Lemmy announced this track with the words “Don’t try to dance to this one or you’ll break your legs” and the band launched into a speedy version of the song. It was just starting to really kick the gig off, when I suddenly remembered why I’d stopped going to heavy gigs a long time ago, after seeing Motley Crew at the Nottingham RCH. A Drum solo. 10 minutes of relentlessly pounding the kit and tossing drum sticks in the air. Why? It all seems rather pointless to me. You’re in a band, Mr. Drummer man, and I think we can see and hear you can play. Having said that, at the end of the solo the guy next to me said to his mate “That’s the best drum solo I’ve ever heard”, so maybe it’s just me. Anyway, after the posing, “Sacrifice” continued and all was soon forgotten as we moved on. “Killed By Death” was magnificent and the highlight of the show, despite the guitarist morphing into Eddie Van Halen at the end.

Lemmy performed a short, impromptu bass solo towards the end of the show, while the other band members had disappeared and left him standing looking lonely, stage front. It was great to hear the master solo.

The band reappeared for an encore of “The Ace Of Spades” and one other, with continuous strobe lighting , and then disappeared stage right, hands and heads raised high, leaving the guitars on stage to feed back at max volume.

I left happy. It’d been a long wait to see the mighty Motorhead. And it was a worthwhile wait.