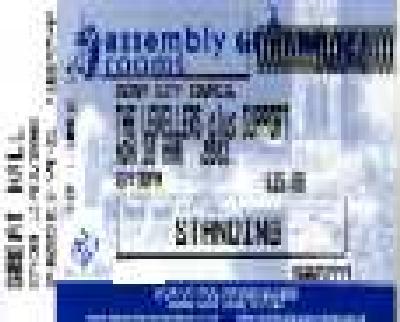 At approximately twenty past nine The Levellers took to the stage to rapturous applause from the expectant crowd and, after brief hello’s, launched immediately into “Come On”. The crowd going wild and the late comers rushing in through the exits to stage front. This was followed by a supercharged “100 Years of Solitude” and then “The Game”, each of which brought the audience to new levels of excitement.

After a brief lull while Mark changed guitars, “Pretty Target” was introduced and dedicated to everyone in the audience with kids, Mark forgetting the third and fourth lines and blaming it on Derby’s good, strong, beer. It was good to see so many younger faces at this gig, with one young lad perched on top of his Dad’s shoulders, pumping his arms up and down to each and every track, and some more up in the seats, “giving it some” as well.

Amongst a few other numbers (“Another Mans Cause”, “61 Minutes of Pleading”, “Julie”, “Carry Me”, “Four winds”), we were treated to the site of Boaksey, the Digerido player making a rare appearance, face painted white and sporting bright orange hair. The crowd went wild for a full on, stomping, “This Garden”, which was closely followed by the excellent “One Way”, with all the band members weaving across the stage.

After this, the band left the stage with Mark telling us that Simon was now going to sing us a song. Simon, dressed in a black shirt with rolled up sleeves open to the waist over a white “Anti-Pasti” t-shirt, proceeded to sing us “When Loves Goes Away” (I’m guessing at the title, as it’s a new song) which really mellowed the night out and gave us a brief respite before the full band reappeared.

Their reappearance was greeted with more loud applause and they burst into “Dirty Davey”, which they played at such a pace that it was hard to believe they could keep it up. But, keep it up they did with an even faster “Burford Stomp”, the crowd bawling out each word with the band, but giving it even more for the chorus “They’ll bury us down further in the ground, than we ever dug down for a living, Seven years of fighting for the dead man’s shilling”.

Mark introduced the next song with the words “This one’s a ballad”. And true to form, it wasn’t, “The Riverflow” played even faster than the previous two numbers, with Jeremy stood on the drum riser, back to the crowd, bashing his bass almost to destruction. To the cheers of the crowd the band left the stage, leaving the audience baying for more.

And more they gave, reappearing for a rousing “Just the One”, followed by “English Civil War” (dedicated to Joe Strummer), Simon’s harmonica and Jon’s violin sounding beautiful together. The crowd loved it! A thumping “Liberty song” was the last number before the band again left the stage.

The second encore began with a rocking version of “Beautiful Day” and ended with the, now familiar, “Wake The World”, Mark lighting a cigarette as the first notes from Matt’s keyboard boomed out and Jon getting a chorus of cheers and applause as the fiddle part began and looking at Mark, who just waved his encouragement, with a bemused smile on his face. They left us with words of thanks, Charlie on the drum riser, blowing kisses and Jeremy giving his usual “cheers” for a fabulous audience performance.

We thank you, also, for another fabulous night from a fabulous band. 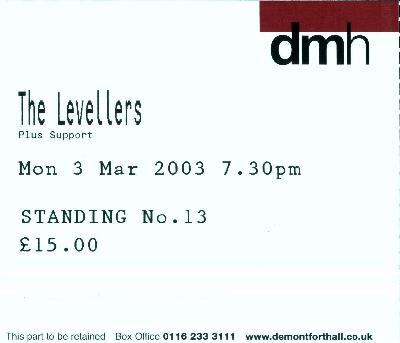 The long road to Leicester winds its way in front of me on a dark Monday night and the journey to see the Levellers begins. De Montfort Hall, from memory a dark dingy theatre with seats upstairs and standing in the “auditorium”, turns out to be a brightly lit and obviously recently renovated venue, with very polite door people and a lovely foyer where you could buy sweets or get yourself a bag of Walkers!

These you were “allowed” to eat in the “auditorium”, but what you weren’t allowed to do was drink, smoke, or, and this is my assumption, enjoy yourself. The main result of this was the complete lack of atmosphere in the “auditorium” and the support act, Nick Harper, was struggling to get the few people who had bothered to venture out of the two bars on either side of the venue, to look mildly interested. He failed, and just gave the impression of trying very hard for little reward, which was a shame.

After a short break, where I wandered round the venue, being eyed suspiciously by the security people, the warm up music for the main attraction began and the punters flocked from the side bars.

To large cheers, the Levellers took to the stage and immediately launched into a superb rendition of “Come On” with their usual enthusiasm and enjoyment. This was followed by “100 Years of Solitude”, and the crowd started to bounce and enjoy themselves.

The band were obviously enjoying themselves as well, Jon grinning as he fiddled his way around the stage, Mark spinning round with his guitar and bouncing off Simon in center stage and Jeremy, jumping up and down, torturing his bass and flailing his dreadlocks at Matt the keyboardist, on the right of the stage.

With classic renditions of “Another Man’s Cause”, “This Garden”, “61 Minutes of Pleading”, “Julie”, the ever crowd pleasing “One Way”, “Liberty Song”, “Carry Me”, “Four winds” (off the new CD “Green Blade Rising”), “Aspects Of Spirit” (dedicated to everyone’s regular, local pub) and the always superb “The Riverflow”, this was a night to remember.

The highlight for me had to be when they came back on and did “Just the One”, which was followed by Mark saying, “this next ones for all you old and young punks out there”, walking away from the mike and then returning to say, as if as an afterthought, “and Joe, who played piano on the previous track”, before Jon’s violin started up for the intro to “English Civil War”, which rocked! A fitting tribute to the late, great Joe Strummer.

They left us for the evening with “Beautiful Day” and then “Wake the World”, Mark singing his heart out, Jon fiddling and Jeremy and Matt accompanying on bass and Keyboards, while Charlie (initially) and then Simon, strummed along gently on acoustic guitar. A lovely way to end and made more poignant in these troubled times by Mark’s meaningful gesture while singing the line “Left in a state of selfish babylon”…

We wanted more, but it was late and time for the long drive home. What a beautiful night!

I’d just like to add my thanks to the venue for the ticket service. This was honestly the best service I have received for ordering tickets. You ring them up or email them and leave a message saying you want to order some tickets and soon after they ring you (!) and take the details and send you the tickets. Brilliant!