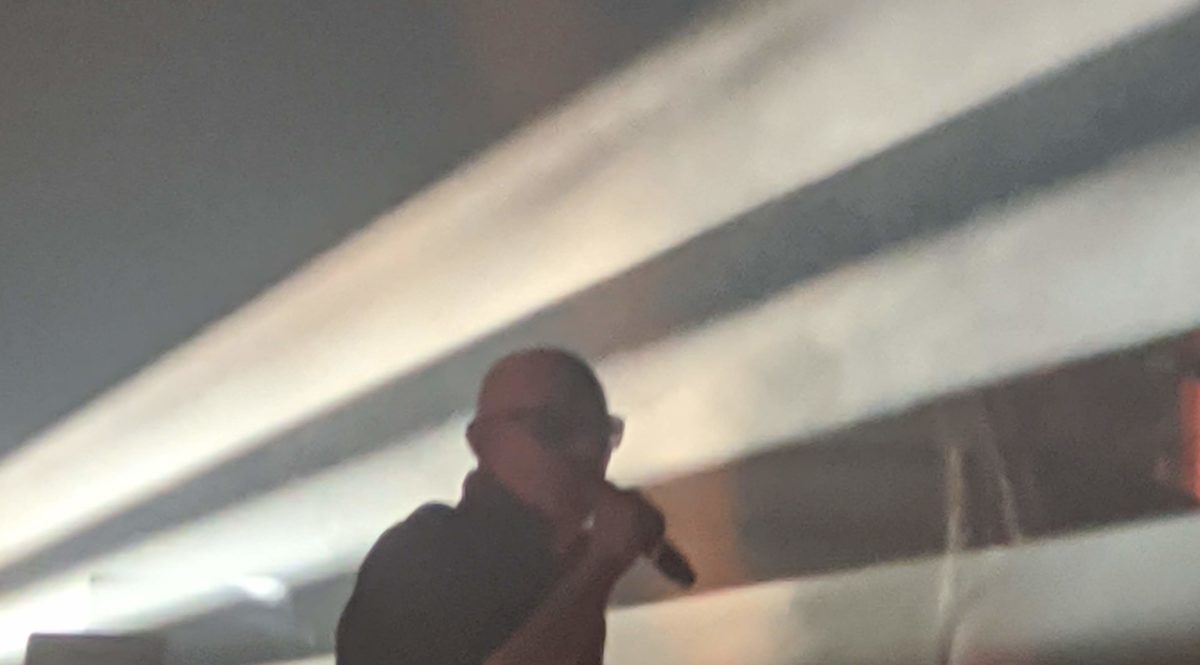 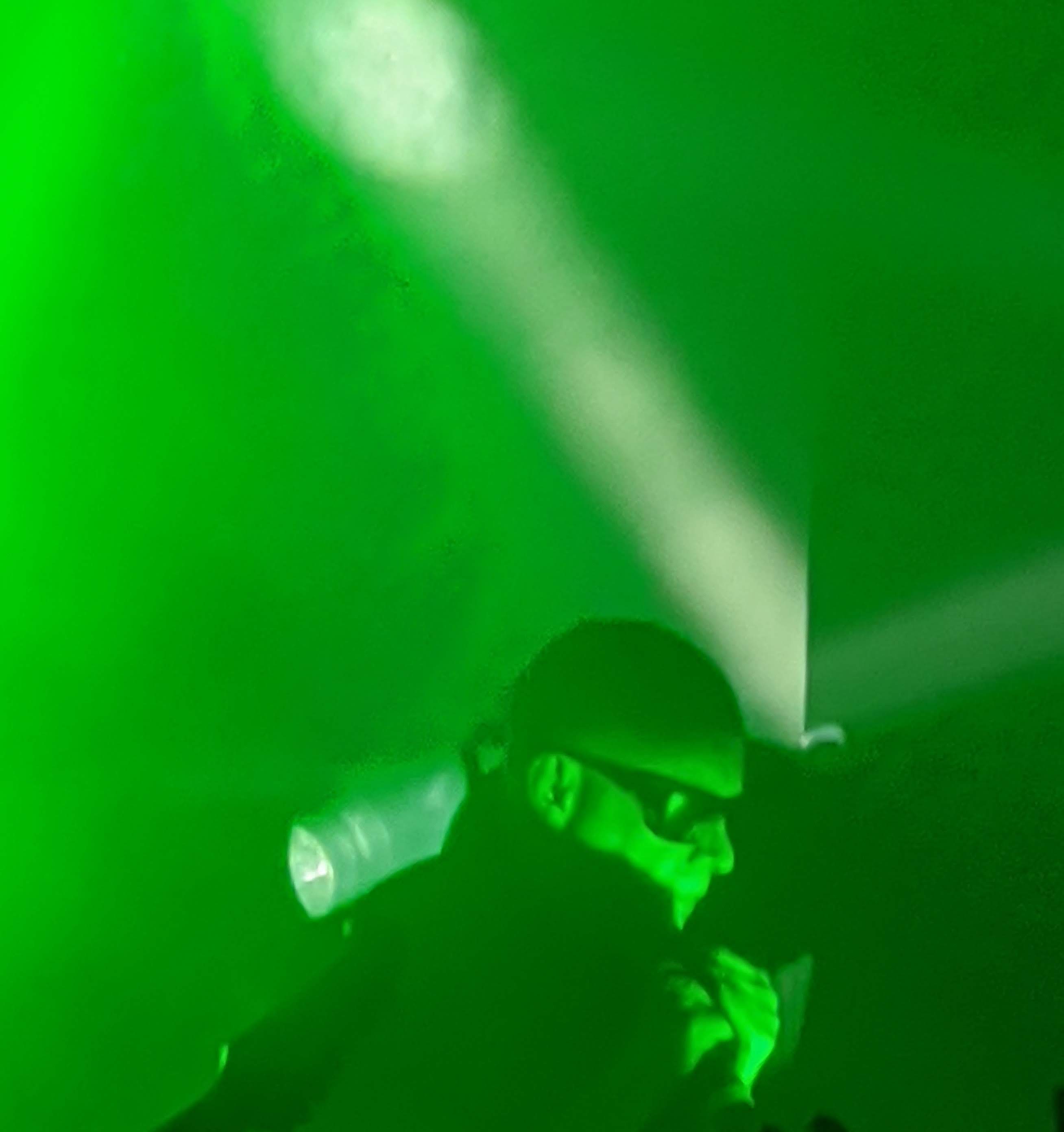 Edit this setlist | More The Sisters of Mercy setlists
Tweet 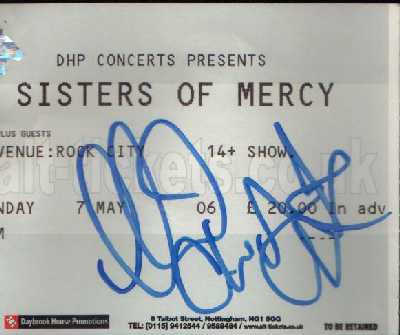 After what seemed like an eternity of waiting (3 months from ticket purchase, 23 years since buying my first The Sisters Of Mercy vinyl), desperately hoping my ticket was going to turn up, reading reviews and reported trips to the hospital for various band members, the Industrial Groove Machine’s Silver Bullet tour finally rolled into Rock City.

The venue was jammed. There were queues for the car parks, for the venue and for the bar. I hadn’t seen Rock City quite this packed and dark for years.

Eventually finding some space with a view I waited for The Ivories, a four piece all girl band from Leeds, who are apparently missing a bassist as there were only three that I could see.

I was quite impressed, particularly with the new single “Heartstrings”. Good sound and good tracks kept me entertained while I waited for the main event.

At about 21:30, the smoke machines started, the stage disappeared into the fog and The Sisters Of Mercy Intro music started. Soon after, Robochrist (Chris Catalyst) materialised out of the mist and we were launched into “Crash And Burn”, a steam roller of a track to start the set with.

Occasional glimpses of Eldritch, Ben Christo, and Chris through the smoke added to the excitement and the lights throughout the show were amazing, reflecting on and off the smoke and creating a real atmosphere.

The instantly recognisable “Ribbons” followed, greeted with a roar from the assembled masses and we were quickly taken into the “Dr Jeep-Detonation Boulevard” medley. This was much better than on some live recordings I have heard and I was surprised at how much I enjoyed it.

I was completely bewildered by the next track. I was expecting “When You Don’t See Me” and it wasn’t. It sounded like one of the newer tracks, but it wasn’t one that I’d heard.

I was later to learn that it was the holy grail. A new The Sisters Of Mercy track. Apparently, they’d played two new tracks (even better news) at the soundcheck earlier in the day and this was one of them. Called “Still” and with a similar overall sound to “Summer” and “Crash And Burn”, I now have higher hopes of a new The Sisters Of Mercy release than in the past few years, especially as it is rumoured to be written by Chris Catalyst and Eldritch.

A sing-along-a “When You Don’t See Me” followed and kick-started the crowd once again. This was followed by “Flood I” and the song I had been waiting for, “(We Are The Same), Suzanne”. I thought the crowd quietened down a little at this point, but for me it was one of the highlights of the show.

I wandered around the venue a bit for “Giving Ground”, trying to get a bit of a different perspective on the stage, but the view was pretty much the same from wherever, three silhouettes, moving through the lights and mist. A glorious sight.

The lighting effects for “Summer” were fantastic. With a bright yellow glow whenever Eldritch sung the word yellow.

The excellent “Slept” continued the set, before “Alice” and “Anaconda” beat the aural daylight out of us. “Romeo Down” and, an apparently longer fragment of, “Never Land” lead up to…

…what I initially thought was a complete mess, but went on to be an absolutely storming version of “This Corrosion” with the crowd desperately attempting to recreate the choral parts. A superb end to the set.

A short break, and then they reappeared, and you could actually see them this time as the smoke parted briefly, for the start of “Something Fast”. Eldritch straining on his mic stand and then disappearing in a cloud of smoke from the floor.

A rather short version of “Lucretia” then stormed through the venue, leaving the fans gasping, as the stage was deserted for the second time (though you couldn’t tell until the mist cleared).

Ben and Chris reappeared for “Top Nite Out”, showing off their excellent guitar skills (this was the only time you could clearly see the band members), before Eldritch reappeared for the end of the show.

“Temple Of Love” brought the house down. Stunning.

I asked a few people for their thoughts on the way out (and in some cases, where they’d travelled from. This ranged from Southampton to Lowdham). To the question “Did you enjoy it?”, one chap answered “Yes”, but there was more than a hint of doubt in his voice. Someone else said that the vocals were turned down too low. In my opinion if they had been any higher, some of Eldritch’s shrieks would have led to a volume of ear-bleeding levels. Another said that if they’d not thought that “Temple Of Love” was going to be the last number they’d have left ages ago. A strange concept, I thought.

Others complained about there being too much smoke. I was slightly disappointed that I could still see the crowd standing there ten feet away, but that just shows how peoples expectations differ.

Having never seen the band before, my expectations were more than met. I loved every second of it and will not be waiting another twenty five years to see them again (I hope).

(And off I went home clutching my “Utterly Bastard Groovy” T-shirt, wishing it said “Shut The F*** Up” on it instead, but they’d sold out. Never mind, you can’t have everything).

(With thanks to the good people at www.myheartland.co.uk for clearing up some problems with the setlist and new song)