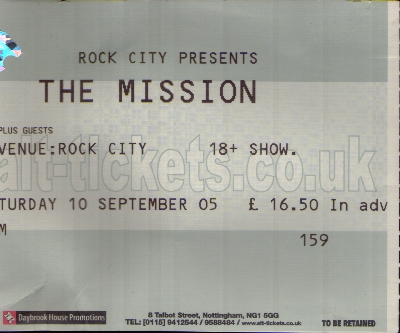 It’s been many years since I went to a Mission gig and so I was quite looking forward to seeing Wayne and company performing once again at Rock City and I had no problem whatsoever tearing myself away from the wannabe sound-a-likes on X-Factor to listen to some real live music.

The last time The Mission played Rock City the gig was moved to the smaller venue of the Rescue Rooms at the last minute and prior to that Wayne had been touring the smaller venues of Europe and the UK with his one man show. Consequently, I was expecting the gig to be either in the Basement or the Rig. So it was a pleasant surprise to find myself in Rock City’s main hall together with a larger than expected audience of Mission fans.

I arrived at about 8:30, so unfortunately missed the support act, Elusive and only just had time to get a beer in before the lights went down and the intro music began at about 8:50.

The Mission took to the stage with Wayne Hussey stood at the centre wearing shades and a low slung guitar and surrounded by burning candles (“Lighting the Candles” tour). With the crowd roaring their approval, we were into the first number, “Afterglow”.

This was closely followed by “Evangeline”, “Hymm” and “Light That Pours”, before Wayne greeted us with a cheery, “Is everyone alright?” The gig really took off at this point for me, with “Severina”, Wayne leaving most of the “Severina” chorus vocals to the crowd.

“Heaven knows” followed, after which Wayne declared that he was bored and “What do you want us to play next?” The crowd answered as one. “Serpent’s Kiss”. And off they went, the crowd singing along, arms aloft, while the mosh pit went wild.

Wayne continued asking for requests to the approval of the audience and we got “Amelia”, “Butterfly on a Wheel” and the fast version of “Garden of Delight”. “Naked and Savage” was proceeded by Wayne asking us whether we wanted to hear an old one or a new one. The predictable response was “An old one”.

Wayne called a halt to the concert once again and said, “We know what’s next, you don’t” and the band proceeded to give us an awesome rendition of “Beyond the Pale”.

In my opinion I thought The Mission sounded a lot harder than in my previous experience and the songs seemed to have a lot more edge to them than I remembered. This is not a bad thing and a rockier Mission should be seen by the music industry as a blessing. Let’s hope that some of the music press gets behind them again, although I can’t see that happening in the near future.

“Deliverance” ended the set and The Mission left the stage, leaving the crowd baying for more.

After a short delay, Wayne returned to the stage and performed a solo song, “Like a Child Again”, with just him and his guitar. This was followed by the excellent “Wake” and then “Mercenary”.

What I thought was going to be the last song was “Wasteland”. The power from the stage was immense.

With a nod to The Sisters Of Mercy, First And Last And Always track “Marian” (“I hear you calling, Marian”) in the middle, I didn’t think they would top this and they left the stage to thunderous applause.

But top it they did, as after a brief interval, which was filled by the sound of stomping feet, they reappeared to blow us away with “Tower Of Strength”. The pyramid building, that had been unexpectedly sporadic all evening, suddenly took on added urgency and before long the crowd were one and two high and screaming “You are a tower of strength, to me!”

And then it was all over. As the lights went up, the crowd was still calling for an encore. The Mission had left the stage.

I wandered off the dance floor towards the bar and another refreshing pint. Despite the excellent gig, I found myself feeling a little morose while standing at the bar. Partially because it was over, but also because of the, compared to past glories, lack of a following.

Although there were more people in attendance than I had expected, it still seems a massive shame that the band should be so unappreciated when lesser talents fill much larger venues.

I heard various rumours afterwards. One said that the band thought it had been the best night of the tour and another that Wayne was unhappy that the crowd had not been as involved as he’d expected. I don’t know how much of either was true, but from where I was standing, neither the crowd nor the band could have given much more to a very entertaining evening.

If the Mission come to visit your local venue you could do far worse than going along and giving them your support.

Oh, and if you want to see what they’re like before you go, you could do far worse than splash out on their new DVD “Lighting The Candles”, which should be released sometime this month.