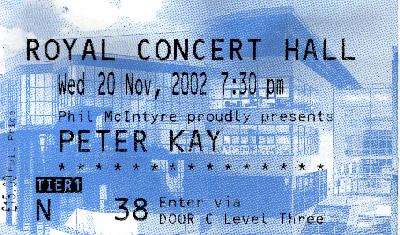 When I was asked about a week ago whether I would do a review for this show, I replied that there were two chances of that happening; slim and fat. I intended to get steaming drunk before the show thereby enhancing my viewing pleasure, but this would also have made it difficult to remember any of it afterwards. However, this masterplan was thrown into chaos by a monster hangover at the weekend which temporarily scared me off excessive booze consumption. So you can thank the kind waitresses and bar-men at Peter Victor’s – I mean Pierre Victoire’s – restaurant for this review, should you feel the need to thank anyone at all.

The act started with the swinging sounds of Tony Christie’s “(Is this the way to) Amarillo?” which eventually elicited a response from the crowd when they realised it was part of the show. As the lights then went down and the hall blackened, Peter Kay’s voice boomed out some of his catchphrases, such as “garlic bread!”, “t’internet”, “get back, you bastard, or I’ll break yer legs”, and the inevitable “‘ave it.” PK wandered casually onto the minimally-decorated stage wearing a black suit, blue shirt and his trademark grin to much applause. On the stage, there were a dozen balloons tied up with string and attached to tins of paint, stopping them from floating away (“they said it would break up the blackness of the stage. Will it shite.”) We’re also informed by two large banners overhead that the tour is sponsored by Chorley FM, the station that’s “coming in your ears” and “where listeners come first.”

One of PK’s first observations was to note that there were nineteen empty seats near the front in the stalls. When these were eventually filled, PK was amused to be told that one of the late-arrivals had brought him a present from the pub; wrapped in a blue napkin was a piece of garlic bread which he proceeded to eat. His set started off as a seemingly ad-libbed discourse on recent events in his life (“I phoned up for a Chinese takeaway last night. I said, ‘Do you deliver?’ and the bloke said, ‘No, only chicken and lamb’”) and observations on day-to-day life that tickled him (“When someone says to me ‘Bear with me’, I always say ‘Is there?’ Then he says ‘Is there what?’ ‘A bear with you.’ ‘Eh?’……”).

After another chat with the audience which drew more stories from him (“You sound like you should be married to my Uncle Nobhead. You know, that daft old relative that everyone’s got. When you ask him if he’s alright, he says things like ‘Only down one side, son’ or ‘Not three bad, not three bad’”), he went on a rambling journey into popular culture. Lionel Ritchie’s video for “Hello” came under particular scrutiny; “What’s that video all about, eh? Lionel plays a teacher who’s perving over a fifteen year-old kid who’s blind. He calls her on the telephone, doesn’t say anything and hangs up. That’s not romantic – that’s called stalking. And he’s there hiding in trees and behind pillars, watching her all the time. She’s blind! She can’t see anything….not a thing! She makes this shit clay-sculpture of his face. It’s crap, eyes everywhere! It’s like one of them ‘Crimewatch’ models. Hey, me Mum says she’s stopped watching that because it’s not as good as it used to be….”

The interval – or should that be t’interval? – arrived and passed. Again, amidst the blackness before the lights come back on, PK started announcing his own re-appearance from backstage but then said “bugger it, I’ll do the rest of the show from here”. He fired off several quick gags which amply filled the pitch-black; “What do you call a judge with no thumbs? Justice fingers. I went to the doctors and showed him I’d got five pricks. He said ‘How do your pants fit?’ I said ‘Like a glove.’ How does Bob Marley like his doughnuts? Wi’ jammin. How do you murder a circus? Go for the juggler.”

When PK at long last came out from backstage, the second half of his performance seemed to have slightly more structure, albeit still with plenty of audience interaction. He discussed celebrity Big Brother, karaoke at funerals and did a fantastic impression of wedding DJ’s, along with music played through a hand-held tape machine held up to the microphone. Someone from the crowd asked him when he’s making a new series of ‘Phoenix Nights’ (year after next), but the good news was that he confirmed they’re currently making a spin-off series revolving around the club bouncers, Max and Paddy. It sounds just as amusing, with stories of Max throwing a bucket of piss over a copper and both of them cutting down a speed camera with a hack-saw after it flashes them speeding in the campervan.

While PK’s television shows are more dependent on witty banter, friendly abuse, comic asides (for example, when ‘Brian Potter’ rolls up in his wheelchair to a reception desk, the woman behind it is talking into the phone; “….and he was just getting to his vinegar stroke when- I’ll have to call you back, there’s someone here, Mum”), and visual gags, his stage show relies on his superb delivery of great lines. He’s the sort of bloke we’d all like to live next door to and you somehow get the feeling that if you bumped into him in the street and offered to take him for a pint and a curry, he’d probably say yes. And you’d both have a great time.

My only whinge about the night has nothing at all to do with PK. Sat across the isle, about four feet away from me, was the most annoying woman in the world who constantly laughed incredibly loudly in all of the wrong places. For instance – PK: “I was walking down the street-“, cue hysterical laughter and thigh-slapping (no, honestly) from the woman. Unbelievable. She even shouted to PK to “party on”, which was something I didn’t think ‘real’ people actually said. PK’s response was to label her Janette Kranky. I hated The Krankies and I hated this woman.

Eventually, the show peaked with a classic rendition of dancing at weddings which I, for one, have seen a hundred times in real life. After a very brief rest, PK returned for an encore which he finished with a rendition of “Oh Danny boy” through a squeaky, helium-induced voice, the audience finally being invited to join in. PK is a very funny man. Very, very funny.

[Author’s note: If there are no capital letters in the above article, blame (webmaster) and not me. In fact, you’re welcome to bombard him with emails urging him to start using the shift-key on his keyboard.]