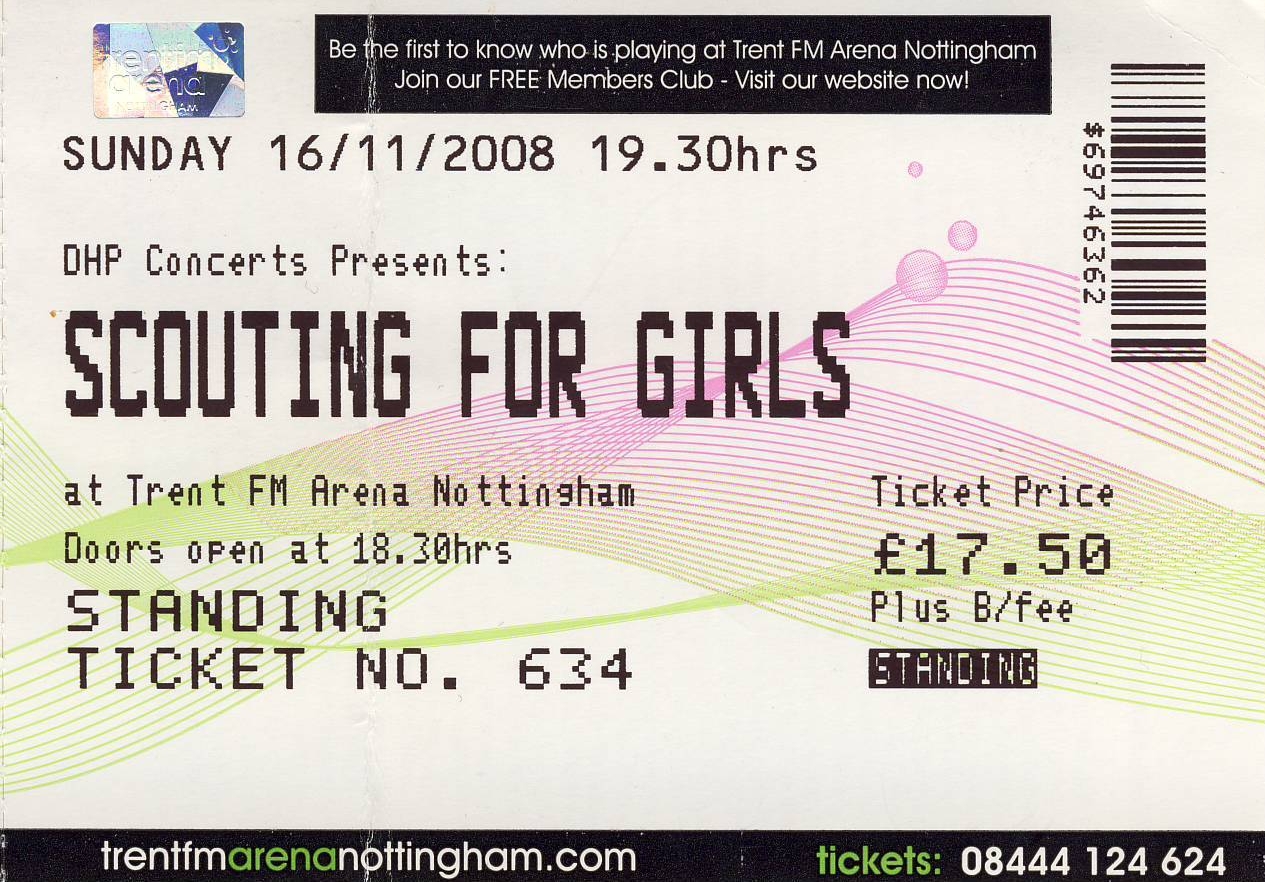 I normally dislike this sort of venue, but was pleasantly surprised by the Trent FM Arena. I wasn’t subjected to a full body search on the way in, I wasn’t treated like a sheep on the way in or the way out and I wasn’t so far from the stage that the artist was the size of a pin head. All in all quite a pleasant surprise really, although I was standing and I don’t think I would have liked the seats very much…

Never heard of him. Apparently from Nottingham, the young Sam, looking quite lonely on the big stage with just his acoustic guitar for company, seemed to be keeping everyone amused when I arrived and kept it up for a while with some fairly catchy strumming and some songs which reminded me of early David Gray (although that could have be due to the sound problems that appeared to blight his set). He lost my attention when he asked everyone to get their mobile phones out and turn the backlights on so that he could organise a mobile phone lit Mexican wave.

This produced much high-pitched squealing, which reminded me of the crowd noise you get at an England School Boys International. Everyone in the seats had, I’m sure, a great time, but it was a bit dull if you were standing watching – although it did look quite good.

If he’d have played some more songs I would have been more impressed.

Keane by numbers, minus the keyboard. Coming to a hit parade near you, ETA January 2009, just after the release of the debut single. There was a saying in the ’80s which went “Indiepop Ain’t Noise Pollution”. Sadly, these days, the proliferation of sound-a-like bands, are pushing what indiepop has become ever more towards the point of it being just that.

To be fair The Days weren’t as bad as my first impression and certainly entertained the crowd, although allegedly being initially spotted by the same label that brought us Coldplay and Keane doesn’t bode well.

With a James Bond themed introduction and quite a good light show, Scouting For Girls launched into their biggest ever show with enthusiasm and not very well hidden glee. This show, being recorded for a later DVD release, is apparently their fourth in Nottingham. The last one being at Rock City, the second at The Rescue Rooms – as Roy Stride informed us – was in front of a huge 73 people, and we remain none the wiser of their first appearance in the City, although I expect it was with an even lower attendance. This shows just how popular the band have become in an amazingly short space of time. The addition of an extra keyboardist/guitarist allowed Roy Stride to bounce around a stage which he knew belonged to his band. It didn’t really matter what the band did as this was one of those feel good celebration gigs that you know is going to be good no matter what happens.

And it was better than good.

Greg Churchouse on bass seemed to be having a huge amount of fun, on occasions swinging his instrument above his head, and Peter Ellard kept up a solid beat from the drum stool at the back.

A succession of past and, no doubt, future hits from the bestselling album Scouting For Girls, together with a number of more unexpected tracks, a cover of an (unfortunately instantly forgettable) Elvis track, and a made up before the show thank you track, were belted out. These included Keep On Walking, It’s Not About You, Airplane Song, I Need A Holiday, (the welcomed like an old friend by the crowd) Elvis Ain’t Dead and James Bond.

During the show Roy Stride’s playing of the white piano which took up centre stage was superb and his constant running back to it for each of the lead keyboard parts seemed to give the gig that little extra boost.

When we got to the track Mountains Of Navaho. Roy disappeared and Greg asked “Where’s Roy gone, where will he pop up?”. Sure enough, taking his life in his hands, Roy appeared in the middle of the crowd on the right of the stage, together with about 10 panicked security guards. Every single teenage girl within fifty yards immediately headed straight for him, and one even got a hug – although initially it was more of a crash – and to sing a few lines. I think there were two encores, during one of which we were taught the thank you Nottingham song and then got to sing along, and the second of which was She’s So Lovely.

Everyone had been waiting all evening for this and crowd went wild.

Scouting For Girls ended on a high and the buzz around the venue on the way out stopped the traffic, although that may have been more to do with people randomly crossing the road. The train to Derby had us all packed in like cattle, which didn’t amuse any of the passengers who’d failed to get a seat. Just one more carriage would’ve made all the difference…

From the relief that was Derby station it was just a quick run across the road to the Victoria Inn, where I arrived in time to catch the first band, who I think were Addictive Philosophy (although the running order was Obnoxious UK and then Addictive Philosophy on the flyer).

Addictive Philosophy is a five piece playing their own punk/ska/oompah racket, which went down very well with the punters. I particularly liked the little extra that the trumpet added to the songs. Hungry Little Worms (In The Soil) was probably the best track – that I managed to catch the name of.

The Obnoxious UK were up next. This three piece from Birmingham thrilled us with a superb punk noise that motivated the mosh pit into the near demolition of the speaker stacks. Thankfully they managed to stand their ground against the onslaught although the film crew between the stage and one of the stacks looked decidedly wobbly at one point. Top stand out tunes for me were Elvis Is Dead and Amelia (introduced as being about an ex-girlfriend). We also had a guest vocalist at one point, who vanished back into the mosh pit, once he’d finished the number. I was really at the gig for the next quality act, which really should need no introduction to anybody. Unfortunately, as ever, most of the rest of the world who continue to follow their media fed diet, seems not to have noticed yet, so Jessi Eastfield introduced his band with the immortal lines, “We like to do this demystification of any rock and roll process, just amble up here and pretend we’re um, not very efficient at all. So we just like bimble about for a bit and instead of all this dry ice stuff and strobes and stuff and then when you least expect it, we probably just launch into song and make a racket”. Spot on.

Mick Murphy’s Dirty Bar was the racket and the mosh pit moshed even more violently than for The Obnoxious UK. With Jessi introducing each number with a short, related, story, Eastfield took us through a seventeen song, 45 minute set, containing more energy and enthusiasm than you see from many a top band these days, and the crowd loved every single minute.

After four songs, including the marvellous Rugeley Crimestoppers, there was a two minute timewarp while Eastfield’s drummer, Oddo, who is recovering from a serious illness, was substituted for Johnny Scumhater (from the New York Scumhaters) and the band bounced into God’s Plastic Railway.

Apparently, there’s Aspartame in Rugeley’s tap water, on top of its other troubles. Aspartame was followed by Money and Grant The Lumberjack. The band seemed to be thoroughly enjoying themselves with Bambi on bass grinning away and bouncing around his mic and Trina belting out her backing vocals.

A shortened Class 20s Of The Apocalypse followed Bury Vic Berry, which was introduced by a little story about how the nasty Vic had caused an asbestos cloud to cover the city of Leicester.

A couple of “indie pop songs” followed, including one of my favourites, Pepper, and then we were taken on a Train To The Top Of The World.

Some of the time with Eastfield, you may spend time wondering what they’re on about, but the songs are fantastic, full of energy and you’ll get it sooner or later. And sometimes you’ll understand immediately, as with the classic Burt Reynolds Rides Again. Why has no one pointed this out before?

The crowd seemed to love it and there was even some, very brave, stage diving.

They finished with Another Boring Eastfield Song which, obviously, isn’t. It was just a shame that I only managed to catch one song from the headline act, Contempt, before making a dash for the last train home.