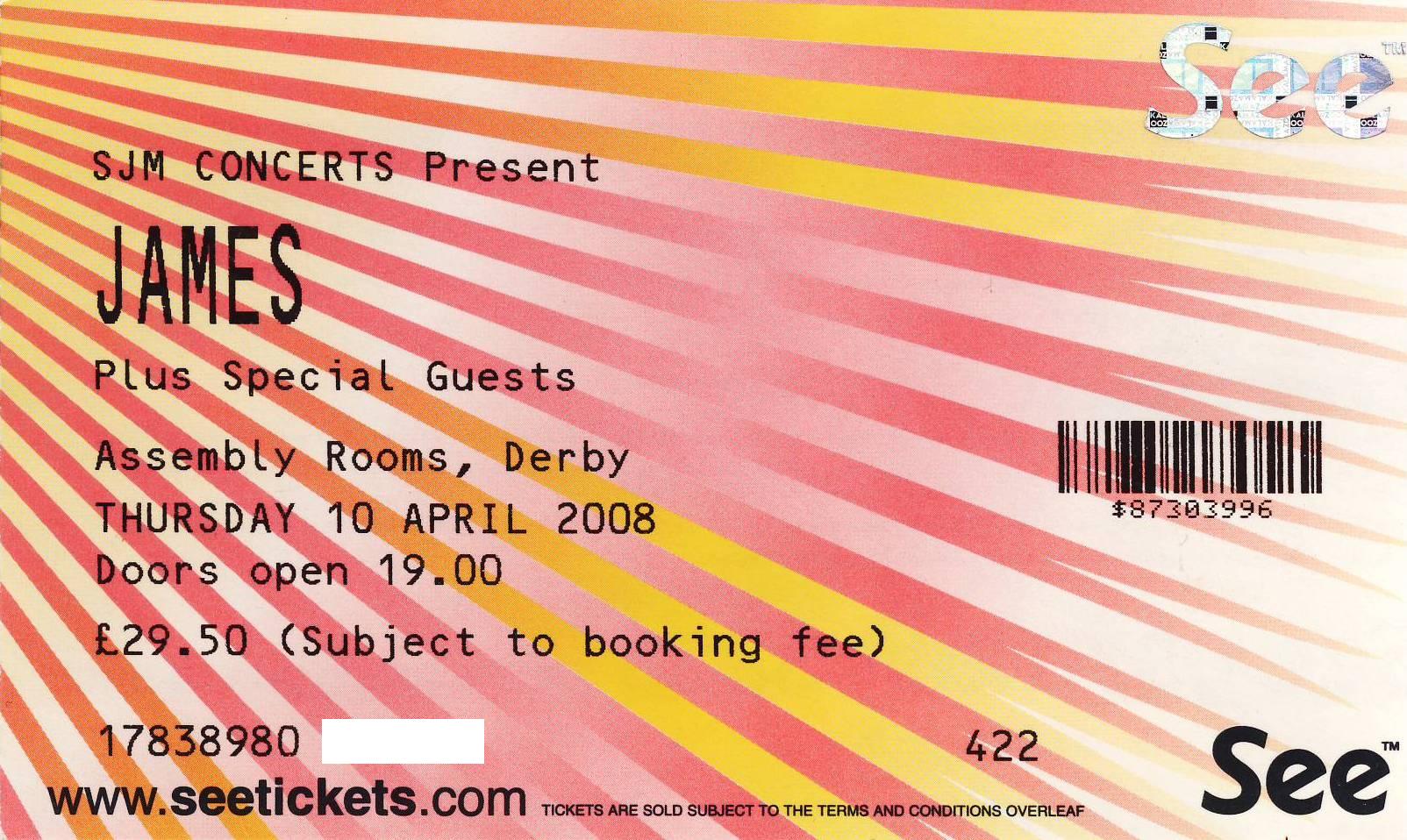 Arriving in the venue reception area was like arriving in a refugee camp for extras from the Sometimes video. To say it was raining outside was an understatement.

I haven’t been to a James gig since 11 August 1990, where they were uplifting on a warm summers evening and probably the best band on the bill, as I remember the Cure were going through a bit of a mixed up patch, so as you can tell, it’s been a while. Having said that, I’ve also seen them many times as I think my first gig was when they supported The Man From Delmonte (or was it the other way round) in Manchester in the summer of 1987. From memory The Man From Delmonte were superb, they always were in Manchester, but I can’t remember anything about the James set.

At about 9 O’clock the lights went down and the crowd roared as James took us into the first number, Born Of Frustration, Tim Booth, resplendent in green tea cosy hat, dancing manically away, stage front. It was a great start.

Unfortunately for most of the audience it then went a bit flat as, as Tim apologised for later. Most of them, me included, hadn’t had time to completely listen to the new CD, Hey Ma, and thus didn’t recognise many of the new songs, although they definitely played Whiteboy, Upside and I Wanna Go Home.

On a brighter note the new songs at least sounded like James songs and a couple may even be future favourites. After a long break between albums this has often not been the case with other bands making a comeback and its good that James haven’t made the mistake that a complete change of direction can often be.

I found myself dancing along to most of the new numbers which is a promising sign for the new album, Hey Ma.

I think we were treated to Ring The Bells somewhere in the middle of the new songs but can’t really remember as I was so blown away when they played Tomorrow, She’s A Star and Come Home, none of which I thought would be played.

It did feel like I was at two different gigs as when the old favourites were trotted out the crowd went ballistic, whereas during the quieter moments of the new songs you could hear people beginning to chatter about which train they were going to catch home.

Tim, to a chorus of boos, announced the last song of the evening, explaining that the ritual of the encore should be expected, to pacify us.

The break didn’t last long as the band were soon back on the stage. My memory again fails me for the first number of the encore (I think it was Johnny Yen), but it was an old one and went down a storm with Tim seeming to float above the crowd. We then got “This is going to be the new single” and were launched into the lovely Waterfall, before the venue was lifted to a whole new level for the final number, Sometimes, with the crowd singing every word at the top of their voices.

The gig ended with the band slowly turning the volume levels down and letting the crowd sing “Sometimes, when I look in your eyes I can see your soul” over and ever, with no accompaniment from the band at all.

And then Tim held his hand up to stop the crowd and said “We can’t follow that. That was beautiful, thank you.” And the lights went up.

The crowd streamed happily out of the venue, many of them singing “Sit Down” on the way.

The only downer on the evening for me, and this in no way reflects on the band, was the venue. I dislike this sort of medium sized venue at the best of times, as they can often be worse than a stadium gig these days for generally woeful organisation.

When you show your ticket on the way into the venue and have the stub removed surely that should be it. Why do you then have to give your ticket up completely to get into the auditorium? I was told that you would be given a ticket back on the way out. I wasn’t. I had to pick one up off of the floor where they had been thrown, presumable by the security guards who had been collecting them. I now have three tickets all with someone else’s name on them. Presumably someone else has mine. Either that or it’s languishing, with the rest that weren’t picked up at the end of the evening, in a bin marked “ID fraudster? Look in here”. Data protection anyone?

The audience are not sheep. It may be a surprise to the venue but the paying public, who after all have managed to buy the ticket and get to the gig on their own, can find their way at the end of the night to the cloak room and toilets and out of the venue without being herded by burley, jobs worth security guards.

Make your mind up what time the gig starts. I rang the venue three times yesterday to get some idea of the doors and band times and no one agreed with anyone else. My ticket said that the doors opened at 19:30. The website said the doors opened at 18:30. The automated telephone line said the doors opened at 18:30. The box office people said that my ticket couldn’t possibly say 19:30 as the door time was 19:00. (They also said that the band would be on at 19:45 to 20:15, when there would be an interval – presumably to buy an ice cream. Would this be the support band’s set, I asked? “No” they replied!). Two of the three tickets I picked up at the end of the gig said 19:00. The other one said 18:30. I had eventually managed to speak to someone who knew vaguely what would be happening and they gave me a James time of 20:30 to 20:45, which turned out to be about right. I wonder if the venue could organise the following into a meaningful sentence. Up, organise, a, piss, brewery, a, couldn’t, in.