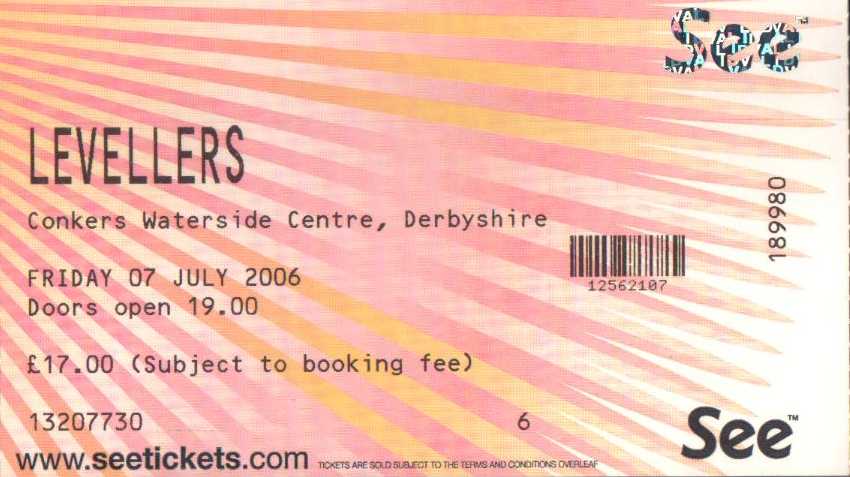 This is the second year running that the Levellers have played at the National Forest Folk Festival at Conkers. Last year they were electric and this year the set was billed as an acoustic one.

The venue at Conkers is set in lovely surroundings, with a little lake a small distance away and I have heard that there is a labyrinth somewhere nearby as well (I must go back for a wander around in daylight).

It was about 20:15 when I arrived at the venue and headed straight to the bar. There was a bar situated at the back of the venue, but the queue was a mile long, so I headed for the cafe/bar overlooking the lake for my refreshment. I headed back to the stage area to sit and await the show.

While I was waiting I was entertained by a folk band who were struggling desperately to be heard over the chattering of the crowd. In fact even the Levellers struggled a little with this during their performance.

Unexpectedly early, about 20:30, the Levellers were announced and soon appeared on the stage. I should have known it was going to be an early start because it was an acoustic set, but it just hadn’t crossed my mind, so it was quite lucky I was there in time, I could easily have been late.

My first thought after the Levellers Big Session performance last month was, “Simon’s back” and then they launched into “Robbie Jones”. There didn’t seem to be as many people here this year as for last year’s electric performance, but the – still large – crowd were having a great time.

Before the second song started, “The Road”, Mark invited us all to dance and people surged to the front of the stage, with a couple of girls dancing on the raised podium between the crowd and the band.

“The Lowlands Of Holland” was next after Mark had crashed a fag from somebody in the crowd at the front. This was followed by someone running onto the stage with what looked like a box of Nicorette and Mark saying “Oh good, more drugs” before popping one into his mouth (how do you sing with chewing gum in your mouth?), before we were taken into a superb version of “Together All The Way”.

“Confess” was next, before all the band disappeared from the stage, all except for Simon. Simon chatted happily to the crowd for a bit before treating us to “When Love Runs Out Of Time”. This fell apart a bit because some people were waving a large flag in his face. I couldn’t see what it said, but he apologised afterwards and it was only a brief stumble anyway.

Simon was joined on stage by Mark and Jon for “No Change” and then the rest of the band came back for “Song For Bloke”. “Sail Away” with a changed arrangement followed, I think. It took ages for me to recognise this, but I think I was being a bit slow as I was still singing along, but I might have got this one wrong.

Simon sung “The Boatman” next. The crowd at the front were getting more bouncy by the this time, and “The Boatman” raised it to another level. Mark announced that the next song would be the last before the break and Simon mentioned that he needed some help with the words, but he seemed to do ok. I was expecting the break next, but Charlie started up with the drums and a more than welcome “Far From Home” kicked in and the crowd went wild. Until Mark shouted something that sounded like “Mind your back!” (but could have been bag) before jumping out of the way before he was hit in the face by a swinging mic stand. Security appeared stage front and started moving people back and at the end the band left for a ten minute break, inviting us to go and get a drink.

“Julie” was straight after the break, with security sat all along the front of the stage. Two different acoustic versions followed, “15 years” and “Chemically Free”, with “Four Winds” slotted in between. A great trio of songs that really got the crowd jumping. Mark then asked if anybody had a birthday in the crowd (“Happy Birthday, Debbie”) before launching into “What A Beautiful Day”, a bra flying onto the stage at the end.

It may just be me, but there was a large proportion of the audience that seemed to be chatting away during the entire performance. I was suffering my own intermittent personal hell thanks to a pissed woman with a dance-around-type white handbag spilling her pint and pushing past me every two minutes (I think she eventually went away to throw up).

“Carry Me” was next with Mark suffering a broken string and swapping guitars part way through. “Men-An-Tor” with Simon on vocals followed, although unfortunately he managed to lose a couple of lines in the middle. The gig really kicked off with the speedy “Burford Stomp”, before “Dirty Davey” closed the main part of the show and the Levellers left the stage.

Boaksey made an appearance with his didgeridoo, dressed in a brown suit and barely venturing out from behind the right-hand speaker stack, and then the band reappeared and launched into “One Way”. The crowd went wild. Mark had to contend with a dirty pair of socks being thrown on stage, saying, “It’s a dirty pair of socks!” (What was that all about then?) before launching them into “The Riverflow”.

A welcome “Plastic Jeezus” was next. Simon struggled to remember which (of the seventy-odd) verses he was on at a couple of points during the song, but the crowd were more than willing to help out.

There was a brief break while the band checked that the right-hand speaker stack was still working because some of the crowd appeared to have crashed into either the stack or the wires. The sound man was looking very worried at one point and waving his torch about frantically, but we could still hear everything.

The set closed with “What You Know”, and a storming version it was too.

Another superb performance from the band and they’ll be blowing everyone off stage at T in the Park tomorrow night (but I bet the BBC don’t show it)!