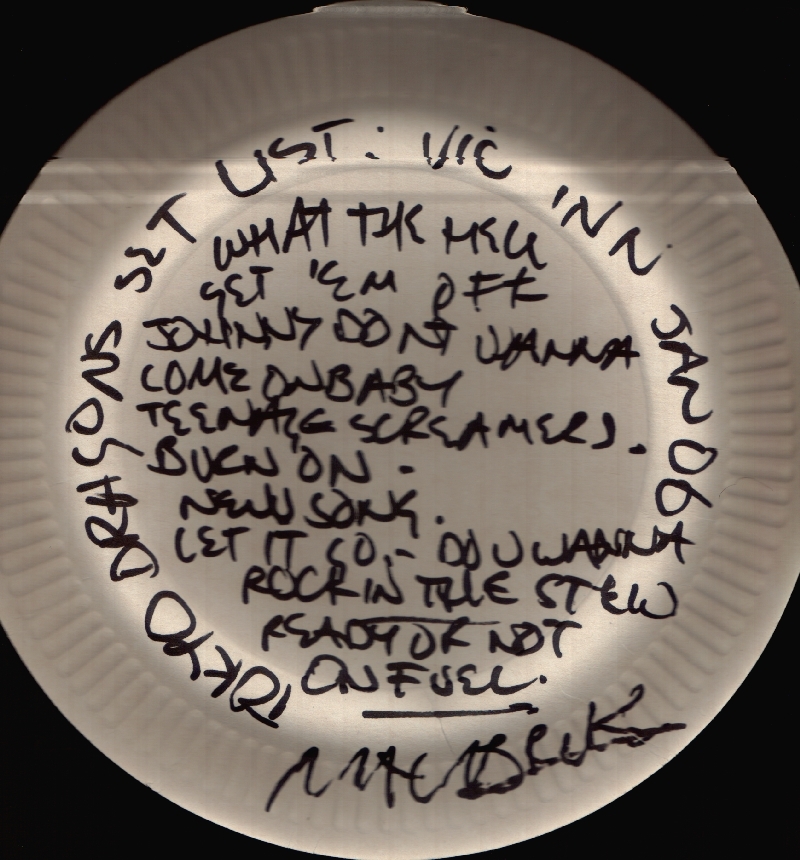 The Victoria Inn is a nice smallish pub near the train station in Derby, with a 150 capacity back room for live music. The sort of venue that needs to be kept for live bands to learn their trade and get a good following behind them. Unfortunately, Derby City Council thinks that the best future for the Victoria Inn is commercial redevelopment. This to my mind means more empty offices with To Let signs stuck on the out side. How this is makes it a redeveloped area is anyone’s guess!

Anyway, back to the review. The venue tonight was warm and welcoming after the freezing 20-minute route march from the bus station. I paid my money, got my hand stamped and relaxed with my pint and waited for the first band.

The venue was populated with a cross section of the rock community, ranging from young girls in London Calling T-shirts to hairy ageing rockers, plus members of the Tokyo Dragons, chillin’ at the bar.

The first band, (billed as) The Atoms, sounded a little punky and threw in a couple of cover versions towards the end of the set. However, they failed to raise me from my seat next to the warm radiator and get me to venture into the back room.

I went into the back room for the next band (billed as), The Fallen Story, but only because the toilets are behind the stage. One look at this lot and I was immediately put off by the bassists “It’s A Kind Of Magic” Queen T-Shirt and made a quick exit. This is probably a little unfair but snap judgements are often made on what people wear and that kind of wear my heart upon my chest syndrome put me straight off. If it had been a “Jazz” T-Shirt I would have hung about for a longer impression.

A few pints later, it was time for the main event and so back into the gig room, together with my plastic glass (it felt like Glastonbury) I went. I don’t remember the Tokyo Dragons taking to the stage, they seemed to be already there. As if they’d always been there.

After a few “Hello Derby” and “How ya doin’?”s they plunged into the second track from their debut album “Give Me The Fear”, “Get ‘Em Off”. Steve Lomax appeared to be having some bother with his Mic as a roadie made a number of appearances to stop it all falling apart.

We got rip-roaring versions of “Come On Baby”, “Teenage Screamers” (with a lot of audience participation) and “Burn On”, as well as a new song which was introduced as “And now for something completely different”.

The band were having a great time, climbing on the monitors and generally jumping around as best they could in the limited space available on The Vic’s tiny stage.

We then got an encore of “Ready Or Not” and “Rockin’ The Stew”, before the band exited stage right for a well earned pint or two and I headed to the bar for an after gig JD’s and coke for warmth on the way home.

My personal highlight was “Do You Wanna”, to which the whole place seemed to rock out.

I have to agree. What a band of this calibre is doing still playing to such a small audience is beyond me.

Mathias Stady, the bassist, was at the bar afterwards, signing stuff and generally chatting to the punters. Great show. Great friendly band. Buy their CD and get them noticed. They deserve it.

As the spawn of fans spilled out of Leeds Uni at 10.15pm, catching even the street sellers off guard, a passing student muttered “don’t these kids know every band does an encore?.” But the truth was the encore had come and gone quicker than you could finish your snakebite.

With the tour selling out in a matter of hours, expectation for the gig was larger than an emo kid’s friends list on my space. This anticipation was only heightened by the painful watching of Gym Class Heroes, the support act are good mates with FOB but they failed to make any more friends with their Unkle Kracker style of music.

The venue was a long narrow hall that sabotaged the sound quality for the unlucky ones squeezed out to the sides, their view for the night being a pillar and maybe half a guitar or face. The fans down the front didn’t seem to care, their favourite band had actually made it to a U.K stage, following Leeds, London and Reading cancellations, and they were determined to soak up every second.

Songs, ‘Nobody Puts Baby in the Corner’ and ‘Tell Mick’ sent the crowd bouncing, with every word being chanted straight back at the Chicago pop punkers. The set list was refreshingly unpredictable with the upcoming single ‘Sugar we’re Going Down’ played midway through instead of the obvious encore song.

‘Dance, Dance’ worked a treat as the encore with lead singer Pete Wentz showing off his sugary voice to the full. The shame was after hitting the pinnacle it was a long heavy drop to the bottom as FOB vanished leaving the fans still hungry for more.

The webpage music scene discovered Fall Out Boy years ago and it won’t be too long until the mainstream pick them up with the same love and devotion.

With the show being so short the sense that FOB had other places to go was more than likely true. The chart and mainstream beckons for the new kings of pop punk. Whether their older fans want it or not, their secret will soon be out for the world to hear.

Co headliners, The Starting Line, were mere toddlers when MxPx first burst on to the punk rock scene. 15 years later and the old timers still play with the passion and sheer entertainment that has been so pivotal in their lengthy career.

The punk rockers of Manchester were thrown a hard decision as upcoming bands, ‘The Academy Is’ and ‘Panic! At the disco’, were playing next door. But the fans in Academy 1 were to have their loyalty repaid, as four top bands blew away any competition.

First up were I am the Avalanche, a New York quartet fronted by ex lead singer of The Movielife. Songs ‘My next beating’ and ‘A new disaster’ got the crowd started with the latter being a tune Mxpx would be proud of.

Not many inside Academy 1 were ready for what was to hit them next. Second support act, The Matches, had obviously not read the word support, as they strolled on stage making the night and the crowd their own. Armed with killer riffs and devastating dancing from lead singer Shawn Harris, they gave it everything. With all the gyrating and crowd diving the vocals were hampered, but no one cared as pure entertainment was onstage.

The Starting Line were quite a contrast to what had just gone before. A small sheepish Ken Vasoli walked on to a stage that suddenly looked a lot bigger, but after one deep breath his piercing voice soon filled the room. The show was certainly in full flow now as TSL mixed the old with the new to great effect. ‘Up and Go’ and ‘Decisions, Decisions’ were the pick of the older songs, with ‘The World’ getting the best response of the night.

The climax of the night was here in the form of punk rock legends MxPx. The Washington trio were certainly up for putting on a show. With lead singer Mike Herrera apologising for the cancellation of their previous UK tour, the boys had some making up to do and be sure that they did. The three wise men of punk burst into old favourites ‘Chick Magnet’ and ‘Move to Bremerton’ with the ease that performing so many gigs brings. ‘Young and depressed’ and ‘Grey skies turn blue ’ show Herrera still has the knack for writing great pop punk tunes to lift the glummest mood.

They say you can’t teach old dogs new tricks but as MxPx played their anthem ‘Punk Rawk Show’ as their encore, sticking to their old tricks seems to be working just fine. The encore was fitting as fans poured out, one feeling united them – they really had seen a Punk rock show.

The first gig of 2006 saw me down at the Windmill for hot newcomers “Super Nashwan” largely tipped to become household names this year. For those unitiated in the ways of Nashwan they mix furious Rockabilly with deep south soul with a motley band who’s line up I am told is forever changing.

This was the first time I had seen them live and I wasn’t disappointed! From the first moment frontman Johnny Nashwan grabbed the audience with his breaking point voice and some pounding Robert Johnson style steel guitar we were gripped . And the temperature was soon turned up full throttle with songs like “End of Days” bringing a rowdy delight from the audience.

However it was the final ballad “Where Are the Heroes” which left me speechless – a sublime mix of Bob Dylan and Nashwan seemed to haunt the crowd with his pained vocals bringing a silence and then a roar from an appreciative home crowd audience.

All the safe money for the big bands of 2006 would be on the Rakes, The Editors and The Arctic Monkeys, but for those who like their music a little more raw and on the left field will be thrilled when the first Super Nashwan single comes out in March. A great gig to start the year.