I may as well be honest right from the start as it will soon be obvious from the review that I didn’t attend tonight’s gig to see the headline act DJ Format. The draw for tonight’s show was definitely Little Barrie, so for those of you looking for a review of DJ Format I must apologise now as unusually the bulk of the review will be devoted to the support.

Stealth is another venue in the same complex as the Rescue Rooms although it is really a club rather than a dedicated music venue and as such the show was going to be a late one. Little Barrie took to the stage about 11:45 which is pretty late for those of us the wrong side of 35.

I have been following the fortunes of Barrie Cadogan (guitar / vocals), Wayne Fulwood (drums / vocals) and Lewis Wharton (bass) from the early beginnings, and I am delighted to see the band getting some well-deserved interest. They have appeared on BBC 6 music on several occasions and Mark Riley keeps making passing comments about the band on his show, but tonight would be my first taste of the Little Barrie live experience, I was not disappointed.

Being the support I knew the set would be shorter than I would have liked, but the quality, wow, it is true what they say that sometimes less is more. The lads put together a blistering set taken from their debut album We Are Little Barrie, a mix of l, soulful rock’n’roll with a bit of blues as well. Highlights were “Free Salute”, “Greener Pastures” and of course the new single “Long Hair” all executed impeccably.

Edwin Collins who produced the album once said that Barrie Cadogan is probably the best guitarist of his generation, high praise indeed but well deserved. To say however that the band revolved around Barrie’s magical guitar would not be fair as Little Barrie is far more than that, Wayne provides some exquisite drums and adds a superb soul feel with an amazing voice, whilst Lewis unassumingly keeps the whole thing together with intricate bass lines which more than fill the inevitable gaps associated with three piece bands. The obvious comparison would be The Jimi Hendrix Experience although the feel of Little Barrie is quite different.

As I said at the start I wasn’t really here to see DJ Format, hip-hop is not really my kind of thing so I won’t insult anyone’s intelligence by claiming to be an expert. To be honest this was the first time I’d even heard of DJ Format so I can’t really give any valid comment at all. What I did hear I enjoyed, not so much the music but actually seeing this type of music performed live, I would put my main taste closer to the heavy rock end of the music spectrum but seeing these guys peddle their wares left me with a better understanding of the hip hop scene and quite a bit more respect for the artist who perform it. 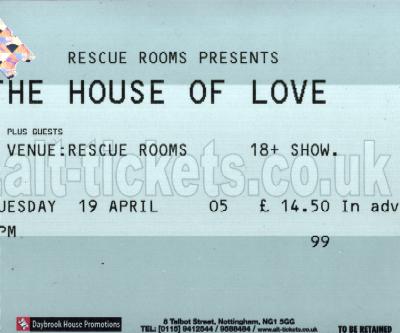 As The House of Love took to the stage the entire audience stared at the stage in absolute silence in anticipation of something very special.

It’s very rare that you get complete crowd silence at a gig and I have only ever experienced it a couple of times (the Sundays very first live dates being the prime example) and the only reason for it is anticipation. You could feel it in the venue.

After fifteen years, longer if you count the absence of guitarist Terry Bickers, The House of Love is back and it’s shining.

Having not yet had a chance to buy the new album (a fact I seemed to share with what seemed to be a large proportion of the audience) the end of the first songs were greeted with appreciative, but not over-enthusiastic, applause. I had actually listened to the new album once via the House of Love Website and was very impressed and had some idea of the quality of the new stuff. But it was evident that much of the audience was there to see the legend, and hear the legendary older tracks.

The first couple of numbers were hampered by Guy Chadwick’s vocals not being loud enough, but once the sound engineer had sorted that out we were off on a perfect high.

Between songs Guy (who didn’t look a day older than the last time I’d seen him) chatted to the audience. At one time he declared that he used to live in Nottingham. In Chilwell. Not many people knew that.

Guy’s vocals were a revelation. I imagined that they would have changed over the years, but to my ears they sounded as perfect as the first time I heard them.

They kicked into some of the classics. We got “Christine”, which shone like the beacon that it was on its release and “Beatles and the Stones”.

We got “Safe”, which I did not expect at all, but which made the night even better for me as it’s probably my favourite House of Love track (with “Loneliness is a Gun”).

We also got “Love” (one of them), “Never”, which rocked like a good one and loads more, including “Gotta be that way” off the new album, “Days run away”. This new song in particular seemed to belong with the older stuff. Somewhere in the middle, I’m sure they played “Hope”.

Then came the second period of absolute crowd silence. “Love In A Car” was massive tonight. It shone with the brilliance of a thousand suns. The crowd leaning into the stage to catch every perfect note picked out by the perfectly played guitars. Awesome. It could have moved you to tears.

And then they were gone.

And all of a sudden the crowd roared its approval. People screamed, people cheered, people stamped and people clapped, but most importantly people made it patently clear that they wanted more of The House of Love and they wanted it now.

They didn’t have long to wait. It all became a bit too much for me at this point but I think that the band came back and treated us to “Destroy the Heart”, with the guitars forming a wall of shimmering sound that I defy anyone to dislike, with Bickers flying round the stage, and then something else and then they once again left the stage.

And then the Lady on the merchandise stall sat down, which is a sure sign that the show was over.

It wasn’t. They came back for more. People streamed back in through the exits and crowded to the front. “Salome” (I think) was gorgeous and was followed by “Shine On” which seemed like meeting an old friend again that you never knew had left town (amazingly, I didn’t hear one shout for “Shine On” all night).

They then played something that I didn’t recognise, but which was introduced by Guy as a “Country and Western song” and then left the stage once again to more cheering.

And the crowd stayed and called for more. But we weren’t getting it and slowly as the lights came up we made our way outside.

Talking to the Lady on the merchandise stall, they’d never done a second encore before. I asked her whether she thought that it had been a good gig and she replied that it was the best of the tour so far. Nottingham loves The House of Love – it’s official!

Tonight was a very special night.

The House of Love are back, with shimmering, shining guitars the like of which I thought I would never hear live again.

It doesn’t get more special than this! 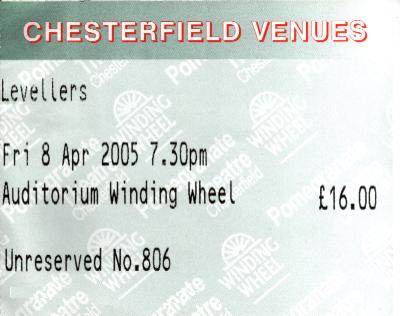 It’s the end of the world as we know it, and I felt terrible…

Chesterfield seems like a nice place, but I arrived in what I thought was good time to get a parking place and make it to the venue, but with what turned out to be, nowhere near enough time.

After driving around a number of the car parks in Chesterfield for what seemed like an hour, and was at least 30 minutes, looking for a space to park the motor, it became very apparent that I was going to have to hike quite a way to see the Levellers. A space was finally achieved about a mile from the venue and I was carefully watched by the CCTV system as I made my way out of the car park.

Having hiked to the venue, I arrived to find the Levellers already on stage and three quarters of the way through the first number, according to the lady taking the tickets. I immediately missed the next song as the lady on the door said I needed to retain my ticket if I wanted to go upstairs. Me being me, I immediately lost it in the depths of my coat and spent the next five minutes searching the bottomless pit that is my coat pocket. Having eventually relocated the ticket, it occurred to me that I would probably not want to go upstairs anyway.

The Winding Wheel is a nice venue, which reminded me in some ways of Stokes’ Victoria Hall. I took my place near the sound desk and settled down for the show.

I found myself enjoying myself immensely. It was great to once again feel the full on might of a Levellers electric gig and, much as I enjoyed the recent acoustic shows, this just blew them away. The new songs “Make U Happy” (the new single, released on 18 April 2005), “Last Man Alive” and a couple of others all sounded fully formed and bode well for the new album. “Last Man Alive” certainly seemed more impressive than when I last experienced it and I am now looking forward to the new album with anticipation.

It wasn’t all new stuff though and there were a number of older numbers thrown in, such as “Fifteen years” (I think), “Sell out” (with what seemed to have some new bits from Simon in the middle), “What a Beautiful Day” and “Liberty”.

Mark was in fine form, telling us that the last time they’d been to Chesterfield was 16 years ago, probably about the last time I was there as well. Simon, (with new longer hair) played his solo song “When Love Runs Out Of Time”, which, as usual, went down a storm.

And then we were into “Dirty Davey”, “Burford Stomp” and “Riverflow”. Faster and faster as ever, with the band looking like they were enjoying every minute and the fans certainly were.

I can’t remember what the first encore was (it might have been “Battle of the Beanfield”), but the second one was definitely “What you know”. Fantastic to welcome this back as the closing number, especially during the fiddle lead bit, where, with Jon playing faster and faster, Simon seemed to be asking him how to play it on the guitar.

It was good to see a Levellers gig sold out again and everyone in high spirits.

Just outside the exit were what appeared to be Rich and the Levellettes, playing a rousing version of “Julie” with just an acoustic guitar and a lot of enthusiasm, to keep us entertained on the way out. Keep up the good work.

On the walk back to the car I was abused by a Chesterfield drinker, who’d just finished drinking his eight pints (well one and a half, but it counts as eight if you spill the rest on the pub floor), with the classic line, aimed at everyone who went to the gig, of “Aha, the great unwashed”. I ignored it as so many others did.

Isn’t it funny how some people go through life with their eyes and ears firmly closed? And some of them have read the NME occasionally as well (which doesn’t help)!

Buy the new single and give the Levellers the support they deserve!