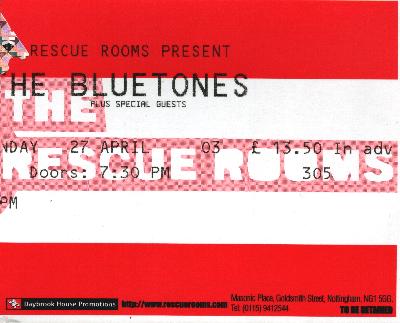 Memories of sitting in a field waiting for Travis to appear at V99 in Weston Park came flooding back to me in the run up to this gig. The Bluetones “If..” makes a brief appearance over the PA, and subsequently proved that Travis, despite the hype, just weren’t that good.

The fact that one, pre-recorded track, outclassed virtually every other bands performance that day, including Manic Street Preachers and with the exception of the Levellers and perhaps the Beautiful South, shows that the Bluetones have some great songs and a great presence and I always expected much from this band. But, as is often the case with the “next big thing”, disappointment is quite often all that is delivered and after three or so albums and the next soon to be released, the Bluetones, to me, have turned into just what we don’t need, a second rate House of Love.

Fortunately for them, although the majority of the tracks on each album are almost instantly forgettable, the great songs shine out light stars in the night sky. This is what saves tonight’s gig, which was intended as a small tour of small venues to re-launch the Bluetones career. The new songs, and there were quite a few, are not brilliant (one, “In the City (?)”, sounded like a bad Big Audio Dynamite), but are not bad, with the exception of the next single “I don’t love you anymore” (not entirely sure of the title), which was the band at their very best and as they said on the night, “We expect you to be sick of this song by the summer”. It should do very well for them, top 10 at least, provided it gets the airplay!

The night was made for me by the appearance of the old favourites and I would have gone home very disappointed if they had not played any. The last song before the encore, “If..”, is the highlight of any of their shows and went down the best of the lot tonight, breaking into a brief rendition of Queen’s “Radio Ga Ga”, just before the excellent “Nah nahs” of the finale.

“Bluetonic”, “Keep the home fires burning” and a cover of The Rain Parade’s “Blue” also stood out, making most of the new stuff sound comparatively mediocre.

The banter with the audience was also a little draining and the last time I saw them, at Rock City, they were a lot better. To introduce each song with the words “Ladies and Gentlemen” and then go on to tell us a little story about the song may be ok once or twice, but before every song it just became a bit of a bore. Just play the music guys, you can do that a lot better.

Still, the hardcore fans at the front seemed to enjoy the gig immensely, bouncing up and down throughout, though how they managed this considering how sticky the floor was and how hot it was, I’ll never know. A lot of missing shoes that had got stuck to the floor were probably recovered at the end of the evening.

There was even one guy at the side who was “air- drumming”!

To be fair, the band did apologise for attempting to brainwash us with the new stuff and in my opinion this showed that they know they can do a lot better as well.

Perhaps I’ve been spoilt recently, having seen such great bands in the space of a few months, but the Bluetones, despite obviously having the song writing and musical talent just didn’t quite do it for me tonight.

Still, I wish them luck with the new album and single. I hope they do well. 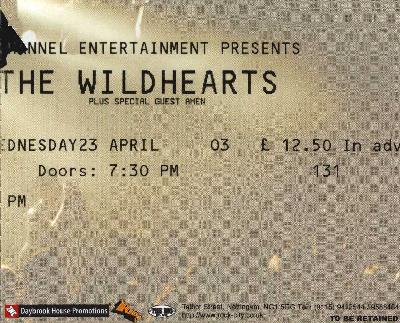 Watching the mighty Real Madrid give the red Manc scum another lesson in how to play football or going to see the support band, Amen, was an unexpected dilemma at the start of the night. It was solved, as is so often the case, by a compromise; we watched Ronaldo score a glorious hat-trick inside an hour to effectively kill off the tie before wandering up to Rock City in time to catch the last two or three songs from Amen.

There’s not much to say about Amen really – they were okay, the drummer gave it loads, and they sounded more punky and less thrashy than I expected but in my opinion, they lacked catchy tunes. Or maybe it’s just me getting old and not being into what the kids are into anymore.

The Wildhearts came on stage around 10pm and opened up with the classic “I Wanna Go Where The People Go” while the crowd went predictably mental. After the song, Ginger apologised for the late start and said that they would need to cut out the chat with the audience if they were to finish at a decent hour which was a shame because listening to Ginger is normally quite amusing for many differing reasons. The next few songs passed by in an increasingly alcoholic blur, thanks to above-average bar service for once, and may have included some, all or none of the following; “TV Tan”, “Sick of Drugs”, “Suckerpunch”, “Stormy in the North, Karma in the South”, “Caffeine Bomb”, “Vanilla Radio”, “OCD”, “My Baby Is A Headfuck” – you get the idea.

Danny’s replacement on bass – a big, bald, bad Jon Poole from Silverginger 5 – fitted in well and it wouldn’t surprise me if he ends up as more than just a temporary fixture, although I would be delighted if Danny proved me wrong. Everyone else was . . . well, good but not great, I guess.

Which brings me on to my customary whinge. Again, maybe it’s me getting old but the gig wasn’t quite as good and energetic as I’ve seen them play in the past. Songs like “Jonesing for Jones” and “Caprice” aren’t bad but there are plenty of other (better) tunes that I would liked to have heard instead. Perhaps I’m looking back at their previous shows through rose-tinted glasses – possibly. Perhaps the band fancied doing some different songs, rather than simply copying the format of previous tours – probably. Fair enough.

For the encore, they finished with three crackers; “29x The Pain”, “Sky Babies” and “Love U Til I Don’t” so I left happy despite my moans. At the end of the day, this gig was passable for what it was, the first proper show at the start of a tour. I’m sure they’ll improve over the next few dates and possibly even get on stage a little earlier in the evening to avoid having to race through the set. Either way, The Wildhearts still have enough great songs in their locker to make even an average gig worthwhile.

Overall, and continuing to flog the football parlance angle, it looked like the band were making a comeback after a long lay-off through injury and hadn’t yet quite found their stride, battling away to a 1-0 home win. Even so, The Wildhearts remain this country’s musical equivalent of Real Madrid – mighty and always a pleasure to watch. 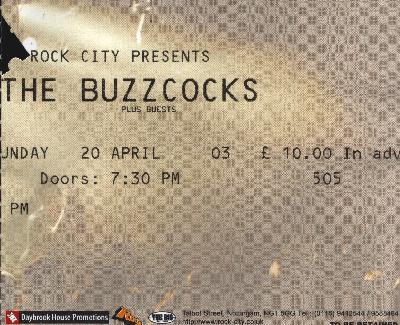 Here’s to hoping. Hoping all day, and for the weeks leading up to the gig, that the Buzzcocks will play “Boredom”. But, no chance. It’s just not going to happen, especially with a new, just released, album to sell.

Then again, sometimes, dreams come true and, after fighting to get served (twice) at the (now renowned) sparsely staffed Rock City bar, and having just downed a triple vodka and orange, what happens? The lights dim, the Buzzcocks appear and, after a quick “hello” from Shelley, and a “one, two, three, four” from the drummer, launch straight into “boredom”.

This was worth the price of the ticket, already!

I last saw the Buzzcocks on 8 December 1989 at the Apollo Theatre in Manchester and, nearly 14 years and a couple of reforms later, they are back with us pushing a new album. Apart from looking a little older and the understandable haircut change (Shelley, with his bleached spikey look, looks more of a punk now than ever) nothing has changed. They still peddle the same excellent show, with the same excellent songs. This is how a gig should be.

From the moment “boredom” began they barely stopped until they left the stage for the first time. Each track beginning as the previous one ended. The drummer starting the next by snapping his sticks together four times as the last chords crashed out from the previous number. “Boredom” Was followed by “Oh Shit”, with the crowd bouncing around like they’d been waiting for the gig for years, and then (not necessarily in the order of the night) “Noise annoys”, “Harmony in my head”, “Sitting round at home”, “You know you can’t help it”, “I don’t mind”, and “Just lust”.

In fact, if you wanted to hear virtually any classic Buzzcocks song, they played it. Even “Breakdown” (off the Spiral Scratch EP) was present.

The band were in excellent form with Shelley smiling and laughing throughout, with his voice unchanged from twenty years ago, and Diggle waving his mike stand into the crowd on “Love you more” to get some audience vocals (Shelley – “Don’t want to end up like a nine day wonder”, Audience – “Oh..Oh…”). “Two little razor cuts”! Definitely!

Other tracks played in the main set were “autonomy” and “Something goes wrong again”, plus loads of stuff which I assume was off the new album (all excellent), before they finished with the superb “I Believe”. Classic stuff. The Buzzcocks began to leave the stage to very mild clapping, while people got their breath back, and then full on cheering as they disappeared from sight.

They came back on to treat us to some more and broke into “What do I get?”, which shone like the true classic it is, followed by “Orgasm addict” (another unexpected track) and “Why she’s a girl from the chainstore”, before finishing with the proven classic “Ever fallen in love (with someone you shouldn’t’ve)”. Mind blowing.

There was nothing they could’ve done to improve the evening. An absolute classic gig and a true lesson in how to play live to almost every other band out there!

I wasn’t going to buy the new album, because I didn’t want to spoil the memories of what a great band the Buzzcocks were. I will now. Because they proved tonight that they are still one of the greatest bands around and every single song they played tonight stood out as an inspiration. A shining light of pure guitar melody and energy in the darkness of today’s world of processed pop and manufactured monotony.

Forget going to see the “reformed” Paul McCartney, the Buzzcocks blow everything he’s ever done off the stage! Buy a Buzzcocks ticket and album! Legendary! Arise Sir Pete Shelley!

Catch them while you still can!

(I wish I was going again tonight).