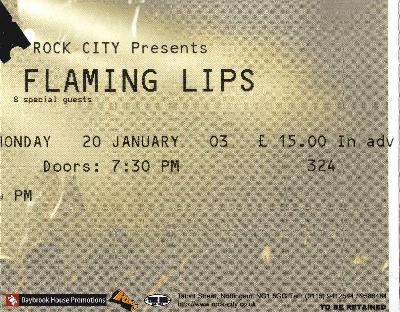 Ever since I purchased a copy of the Neil Young tribute album, The Bridge, about 15 years ago now, on which The Flaming Lips performed a cover of Young’s “After the Goldrush” (and which also contained the Pixies excellent “Winterlong”), I have wanted to see The Flaming Lips and hear some more of their material.

Last year I finally bought “Yoshimi battles the Pink Robots” after first hearing “Fight Test” on the Flaming Lips website and being mightily impressed. The rest of the album, as expected, is also very impressive (as borne out by the fact that the current single “Yoshimi battles the Pink Robots Part I” is currently riding high in the charts at No.14) and well worth splashing out on.

I arrived at the venue to find a completely deserted foyer (with the exception of the three doormen) and thought “It’s deserted, there’s nobody here at all”. However (and this proves that getting there a bit earlier would have been a good idea), on entering the venue proper, the place was packed. It was obvious that there was a great mood of expectation as well, as we all waited patiently for the band to appear.

Which they did moments later, all the band members, except Wayne Coyne, who was in a suit, dressed as animals, one as an elephant, another as a rabbit, and the guitarist as a zebra. They launched into the first number with plenty of aggression and to the accompaniment of large balloons, confetti and glitter being thrown into the audience, and Wayne swinging a light round his head! This was quickly followed by “Fight Test” and the show really got under way.

Amidst the numbers, which included “Yoshimi battles the Pink Robots Part I”, “It’s Summertime”, “Do you realize” and “Vaseline”, Wayne ruminated about some of life’s questions, including introducing “Santa” (who travels with the band wherever they play), and asking, “if you don’t believe in Santa, how can you believe in God?”. Fair point.

The fake blood went down well with the audience and we also got to sing “Happy Birthday” to two of the audience members and again to Wayne (who’s forty second birthday it was a couple of days before). Afterwards he seemed genuinely moved by the experience, and proclaimed that he would mention us all somehow on Top of the Pops, which they are playing on Friday. Whether he does or not is another matter but, the Flaming Lips on Top of the Pops, with guest hand puppet to help sing “Yoshimi” with Wayne, should prove an interesting experience.

After playing the final track the band went off to rapturous applause and after much shouting reappeared to perform an encore, which was very well received by the crowd.

After all the years of waiting to see them, I wondered whether I would appreciate the experience, and I can honestly say that I loved every minute of it. It would have been even better if I had known more of the material that they played, but that’s my own fault for being too tight to dip my hand into my pockets earlier.

Would I go again? Of course I would! But considering that the band only ever seems to play four or five dates in this country every two years or so, I might be in for a long wait. Fifteen years perhaps? I hope not!

If you get the chance, go and see the Flaming Lips, whether it involves a long journey or not, they’re worth it! If you don’t manage to see them, then buy the album “Yoshimi battles the Pink Robots”. It might change your life.