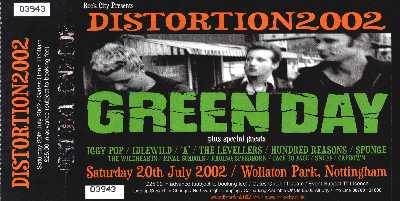 This was the only festival I attended this year and I was hoping for a gorgeously warm summers day, with no rain (thank you very much)! Unfortunately, it didn’t look like it was going to turn out exactly as I had hoped, and this prompted the purchase of a wet weather coat in the morning.

Never been to a festival before when it’s rained (except mild drizzle at reading for the last stone roses gig – no john squire and Ian brown sounding as out of tune as the first time I saw them), but this proved it is an experience not to be missed!

The day started off nice, fairly warm (t-shirt weather) with a few clouds. I arrived (late as usual) and missed Capdown, Snuff, Face to Face and Sponge (although Sponge sounded alright as I walked over the hill on the way), to be told that the line to get in had been miles long and eventually they had had to open the gates as the first band was on.

The first band (that I saw) was Raging Speedhorn who were, well they did their best and were enjoyed by a proportion of the, young, crowd (napalm death are still going, I believe).

Then there was the Levellers, the main reason for going, and a quick dash to the front (or as near as I could get due to all the kids waiting for Hundred Reasons, who were unexpectedly good).

God knows what they played, because it was over so quickly (evidently they’d swapped slots with the Wildhearts which meant less time), and I spent half the set fighting my way out from the crowd to get my new coat, when the rain began to fall, but they were as great as ever. the new single “come on” was definitely the highlight for me as they seemed to get a renewed energy when they played it. Hope it does well, when it and the new album are released in September!

I then, while getting soaked and colder by the minute, watched ‘A’ and Idlewilde, who both performed entertainingly, the hit singles going down the best.

It was back down the front (the smaller stage this time) for the Wildhearts, who performed to their normal high standards, playing such tracks as “I wanna go where the people go”, “Nita nitro”, “greetings from shitsville”, “just in lust” and the new single (the title of which escapes me).

Iggy pop was tremendous. energetic, entertaining, annoying (probably, for the close residents of Wollaton park “mother****er being his favourite word) and generally proving why his career has been so long and successful. “I wanna be your dog” and “passenger” were the highlights, but there was a lot of other good stuff in the set.

After a long wait, as all the other bands had started early, Green Day came on to much applause and accompanied by a pink rabbit (why?). I must say that after looking forward to seeing them so much, it was a shame to come away disappointed. It wasn’t that they were bad, it was just that large amounts of audience performance (15 minutes spent getting three kids to play the instruments and then giving a guitar to the one who played lead is great for the kids, but I was just bored) didn’t help them make a show of it. I love green day, great band, great songs, but, on this night I went home disappointed, cold and wishing they’d come back on (after smashing up their kit) to play “time of your life”, as they still had half an hour to go before they had to finish.