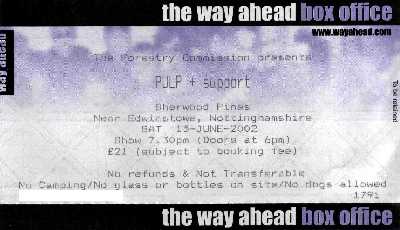 Talk about timing it right. I arrived at the venue at nine o’clock, totally missing the support band, and being the last car to be parked in the car park, to be told pulp would take to the stage at 20 past. This is the way i sometimes like to do things, having witnessed many abysmal support band’s which don’t justify the time and effort of turning up to see them. The fact that i had what i thought was a very bad case of hay fever at the time (which later turned out to actually be flu) didn’t improve my enthusiasm for turning up early.

But the gig really improved the mood. Pulp took the stage, as promised, at about 20 past 9 and launched straight into “weeds”, cocker prancing about in his own classic style.

Cocker bantered with the audience throughout, eating the odd packet of crisps thrown at him, taking his shoes off and waving his feet at us and generally appearing to enjoy himself immensely.

The final song before they left the stage was “sunrise”, magical guitars singing out and bringing the main set to a classic close, leaving the audience begging for more.

Coming back on to perform “babies” (which was brilliant) left us with a deep craving for something else and the hope of hearing “do you remember the first time” as they came back on again filled me with expectation.

However, they went on to perform what turned out to be the highlight of the gig, which was the final encore. The band launching into a rehashed and darker version of “common people” with Jarvis Cock(er)ing it up spectacularly about 5 minutes in, only to restart it from the beginning, with superb vocals (the second time round) over a deep beat, building up to the classic chorus and seeing us leaving, as the light faded, happy and slightly bewildered by the greatness of it all.

Bugger of a traffic jam getting out though!

I arrived late, as usual, and missed everything on the Friday night, together with a night in a tent/caravan. Having managed to get a couple of £20 tickets on the door, i arrived to catch most of the Nagus set, which was very good, especially as i have heard nothing by them before.

There were a number of familiar faces in the crowd (including Jon, Simon and Mark (who i initially failed to recognise, as his hair appeared to have gone grey since may – probably the strain of writing all those new songs)), and everyone seemed expectantly happy, especially as the beer was cheap.

After a short break when nagus had finished, we were treated to a set by a (middle aged, for want of a better description) couple, the bloke wearing a stetson and the lady wearing a white with pink pom-poms, andy pandy suit (anybody know what they were called?). The most memorable song was, i think, called “i am a bee”. They brought the crowd, which by this time had virtually filled the venue in anticipation of the (acoustic) Levellers, fairy cakes at the end.

After a couple of Captain Beefheart tracks from the p.a. The Levellers were introduced to the crowd, to warm applause and a shout of “god, you’ve aged” from the back, to which mark agreed.

The band (seated in their drunk in public arrangement (minus rev)) started with “the ballad of Robbie Jones”, “carry me” and “cardboard box city”. Having lost myself to the emotion of being right at the front i may have missed some tracks in the following list, but i think i got most of them!

“Beautiful day” finished and mark was given a toothbrush and mobile phone by an exceptionally happy chap, who i don’t think was too sure where he was, but was enjoying himself nonetheless. Mark asked him “are you trying to chat me up?” and then continued with “you don’t want to, I’m from Brighton ya know”!

“Elation” (the acoustic version) followed and then (in no particular order) “men-an-tol”, “just the one”, an inspired “one way”, “riverflow”, “battle of the beanfield”, “is this art”, they slowed it down for “julie” and then back up to speed again (Mark threatening to burn Jon’s fingers off) for “dirty davey”, “the boatman”, “irish tune” and then finished (i think) with “15 years”.

What a great gig – see you at rock city in November and good luck with the new album!

This was a great little festival which I would recommend you to attend, even if the Levellers aren’t playing next time!