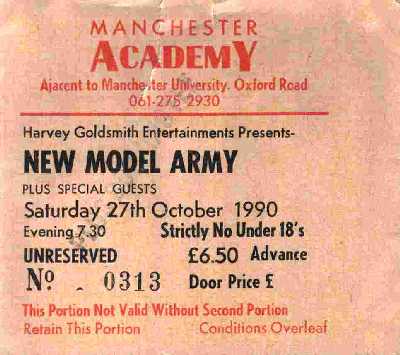 Sitting in a pub on Oxford Street wondering whether to bother turning up to see the support now seems a pointless exercise. What on earth was I doing?

I arrived at the Academy and got in just as the support band took to the stage and I stood there open mouthed for the entire set, breaking only to continually ask fellow gig goers, “Who are this band”?

I went to see New Model Army and it was NMA I was waiting, with much anticipation (despite the uninspiring new album, “Impurity”) for, but it was the support that left us all breathless.

Never have I seen such an awe-inspiring band. They took to the stage, they played, they danced, they enjoyed themselves, and they never stopped.

I don’t know any of the tracks they played, but all of them were top quality. The fiddle player adding that special something extra to each and every song that seemed to make it all come alive. The final track of the set (this turned out to be “What You Know”) featured the lead singer lifting the fiddle player onto his shoulders and running round the stage while the music got faster and faster, and the crowd went wild.

This band rocked (folked?). Catch them if you can. They’re called the Levellers.

After the support, New Model Army never stood a chance, from my point of view. They played to the usual high standard that is expected from an NMA gig, but just didn’t cut it tonight. Slade came across as slightly disinterested and going through the motions, but the crowd, still on a high from the support, were well up for it and the stage front was heaving.

They ran through most of the stuff from “Impurity” (the track “Impurity” and “Bury the Hatchett” standing out as one of the best”) and played a few older crowd pleasers (“51st State” “White Coats” and “225” and “Betcha” getting the best reaction), but the night belonged to the Levellers, and all the conversation on the way home was of how great they were.

I’ve bought the album “A Weapon called the Word” now and it’s amazing. Buy it!